When you wake up to no power at every outlet on a wall, it can bring life to a halt.

Instead of starting the day with a steaming cup of coffee and a quick catch-up with your favorite IGers, you get to listen to your family’s complaints —why do we have to live in this old house anyway?

Before you start calculating the hefty bill from the electrician, take a deep breath.

With the right tools and a little patience, you can figure things out.

In this post, I’ll help you troubleshoot and fix problems associated with electrical outlets not working on one wall.

Why Don’t You Have Power? 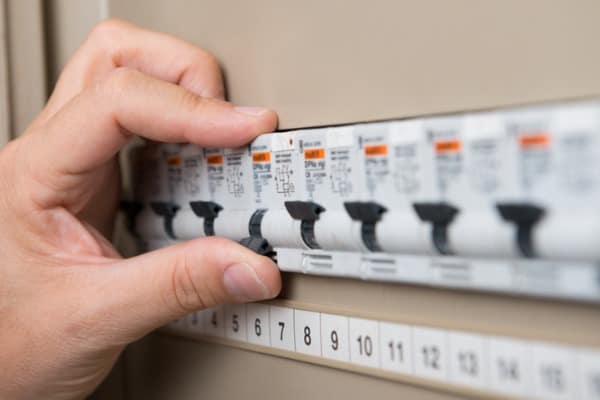 I advise taking a deep breath when you encounter electrical problems because often it’s something so simple that it’s not worth the panic.

Come on, aren’t we all inclined to get at least a few jitters when facing issues with our home’s electrical systems?

Let me ease your mind. Here are the most common troublemakers whether you’re in your living room or troubleshooting garage outlets not working: 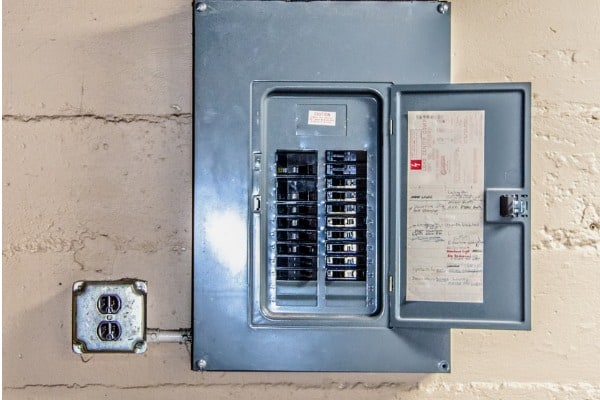 It’s the first thing you should check when you don’t have power to several outlets.

Tip: If you live in an older home (pre-1960s), you may have a fuse box instead of a breaker panel. In that case, losing power to the electrical outlets along one wall may mean you’ve blown a fuse.

According to the CPSC, when a GFCI outlet detects an electrical surge, it’s supposed to shut off.

This is an even safe option vs regular outlets that should also already be grounded to your home’s main electrical box (see how to fix an ungrounded outlet if you’re not sure).

GFCIs sometimes get temperamental and shut off even when there isn’t a surge.

First, unplug any appliance you’ve plugged into the GFCI circuit. Then, push the RESET button on the outlet.

If this isn’t working, read on. You may also need to replace your GFCI outlet if it’s old. It’s a good idea to do this every 5-7 years anyway. 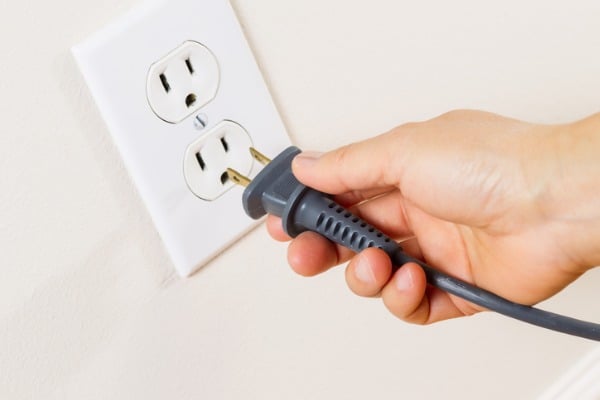 If you discover a tripped breaker, you probably flip the breaker back on and go on with your day.

But did you really deal with the issue of no power to your outlets?

For the moment, maybe, but if the tripped breaker is due to an overloaded circuit, you’ve only applied a bandaid.

Let me tell you a story.

The first time I experienced all the outlets not working in one room, it was Thanksgiving Day.

I probably stomped down to the basement at least 5 times before I realized it was my fault. I was running too many energy hungry appliances at the same time, on the same circuit.

If you try to send more current flowing through a circuit than it’s designed to carry, you overload it. We’ve all done this!

I do this often in fact on my outdoor outlet when I run demanding power tools sometimes.

Unplug the key power consumers. Then, redistribute them so that they run on different circuits.

Loose wire connections are the root of multiple electrical problems, including lack of power to an entire wall.

Wires go through a constant cycle of expansion and contraction. Every time you plug something into an outlet, you initiate yet another cycle.

With all that activity, over time, wall connections can loosen in side the outlet and in your walls. 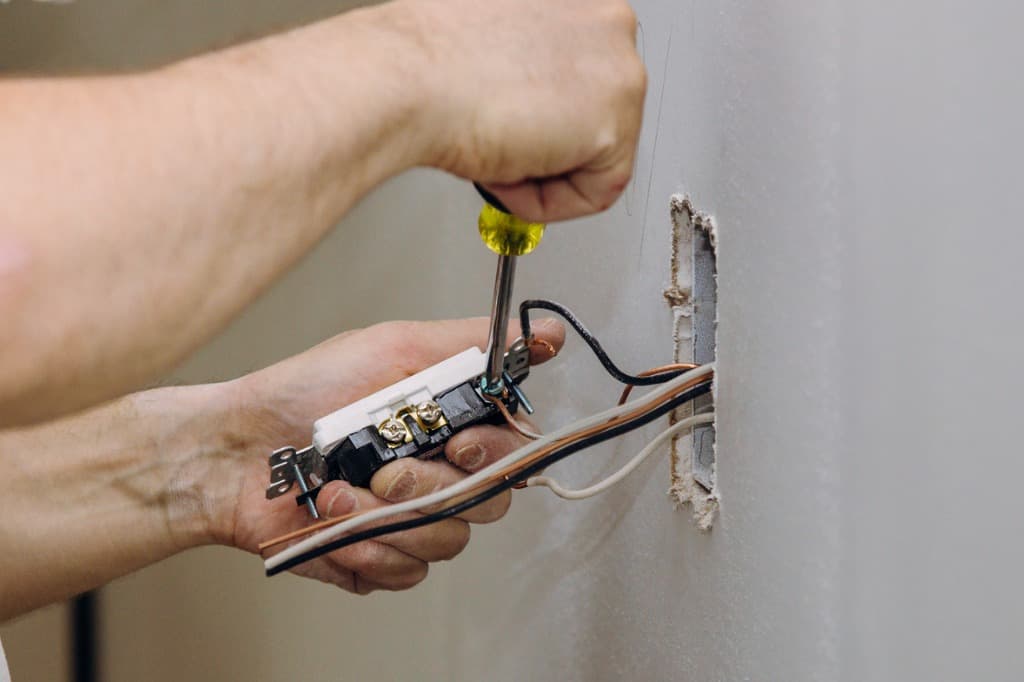 Unless you know precisely how the electrician installed the original wiring in your home, there could be many intriguing things going on behind the walls.

Backstabbing wires is one. Electricians sometimes backstab wires as a shortcut.

Instead of anchoring the wires with screws, they push them into the small holes at the back of the receptacle.

Backstabbing kills the rest of the circuits in the house. We’ll discuss below what you should do.

Check out this video learn more about why it’s not always good to use the backstabbing method:

Have you noticed discolored outlets?

Blackened outlets indicate a small fire has occurred. Blame it on a power spike, faulty wiring, age (the outlet, not you), or an overloaded circuit, to name a few.

If the outlet shares a circuit with other outlets, the entire group will lose power.

Burned out or otherwise damaged outlets should be replaced immediately to prevent more serious problems.

Tips to Get the Power Flowing Again

Before you do anything, think safety!

If you’re going to mess around with wiring, especially if you’re making repairs to a loose wire, please turn the power off at the electrical panel.

While you don’t need a fully-stocked electrician’s toolbox to troubleshoot and fix most home electrical issues, you’ll want these:

Tip: If you’re not familiar with voltage testers, you’ll want one to help with locating the power feed when electrical outlets are not working on one wall.

Before resetting the breaker switch on the electrical panel, turn off light switches and unplug appliances and devices.

It goes without saying no to touch the electrical panel with wet hands.

If this all seems like something everyone knows, well, we all need a reminder now and then.

The key to safety while working on the most powerful system in your home is a healthy respect for electricity.

Yes, you can check the wiring yourself.

Reattach any loose wire by positioning the wire underneath the correct screw and tighten.

How to Tell If You Have Connections Use Backstabbing Wires

It’s easy to find out if you have friends who are backstabbers. Backstabbing wires are a little harder to locate.

You have to look farther than the front end of the receptacle.

If you see wires inserted into the four holes in the back of the box, you have backstabbed wires.

The fix for this issue isn’t complicated.

Pull the wires out. Cut and restrip before anchoring them with the screws.

By the way, if you discover one backstabbed outlet in your home, there’s a good chance you have more.

What Else Should You Consider? 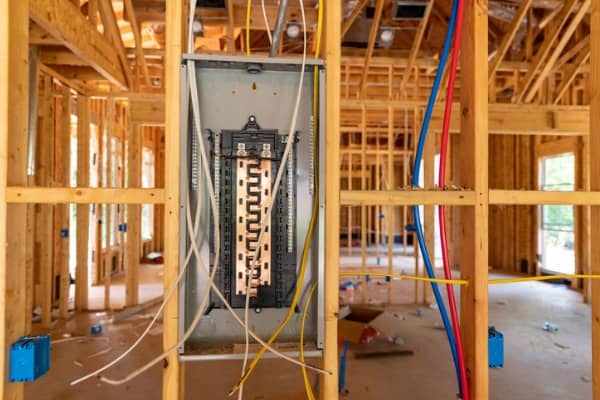 Maybe you’re like me. You believe all homes are wired the same. They’re not.

While all residential structures must adhere to building codes, it doesn’t mean every electrician will wire a house the same.

Why should it matter?

Knowing that electrical contractors sometimes use their own shortcuts and installation methods means you may need to dig further to find the fix.

You’ll also want to learn how to use the tools of the trade to make DIY electrical work go smoothly.

Are older homes more likely to have trouble with all outlets in a room not working?

In the 1950s, 60-amp systems powered most homes. By the 1960s, amperage limits increased to 100 so that homeowners could power multiple appliances on one circuit.

In homes built today, not all outlets in one area connect to the same circuit, reducing the likelihood of losing all power in one room.

Why does only half of an electrical outlet not have power?

It’s not unheard of to have power to the top plug in a duplex outlet but nothing going to the bottom plug. You could have what’s called a switched (or half-hot) outlet.

Switched outlets have one plug permanently on while the other turns on and off at a wall switch.

If you don’t have power on one part of the outlets on a wall, check out the wall switches in the room.

Should I replace all the outlets on a wall if I find one is bad/burned out?

However, replacing outdated outlets when you switch out a bad one helps bring your wiring up-to-date. Your fire risk also drops significantly.

DIY and Electrical Outlets Not Working on One Wall

But once you’ve explored wiring and other electrical system issues, a power outage on one wall will not intimidate you.

With a healthy respect for electricity and a little determination, you’ll have power running to your outlets in no time.