If you’re looking for a straight answer, then: no, you cannot use duct tape in place of electrical tape.

But I’m sure you already got that advice from at least 10 other search results.

Although duct tape has for years been a multi-use solution for many problems you might face at home, it does have its limitations.

There are quite a few key differences between duct tape and electrical tape, and it’s important to know the distinction and why they aren’t interchangeable.

Knowing about these differences will help you understand why you cannot use one for the other.

Let’s look at some of these differences. 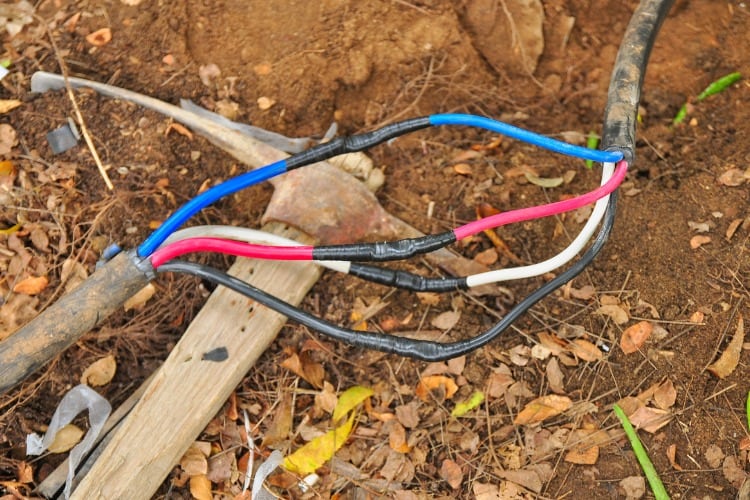 Duct tape has built a reputation for being the one-stop solution when something needs fixing, which is true to a certain extent.

However, electrical tape is way ahead of duct tape when it comes to durability.

Duct tape can lose its adhesive properties when it comes in contact with water.

It also degrades quite fast when exposed to high temperatures.

In contrast, electrical tape is much more durable when exposed to water or heat, as well as construction materials inside wall wiring, making it more suited to be used on electrical wirings.

The shelf life of electric tape is also much longer than that of duct tape.

In either case, it’s best not to use either electrical or duct tape that’s been with you for years, especially when you need them for something important.

Duct tape has many more applications than electrical tape.

Since it needs to adhere to different surfaces, the adhesive on duct tape is quite strong.

Yes, you can peel off your skin with duct tape.

This doesn’t mean that electrical tape has a weak adhesive by any means. It’s just not as thick as duct tape.

It is specifically made to stick strongly to insulated wiring, which makes sense as that is its primary use. 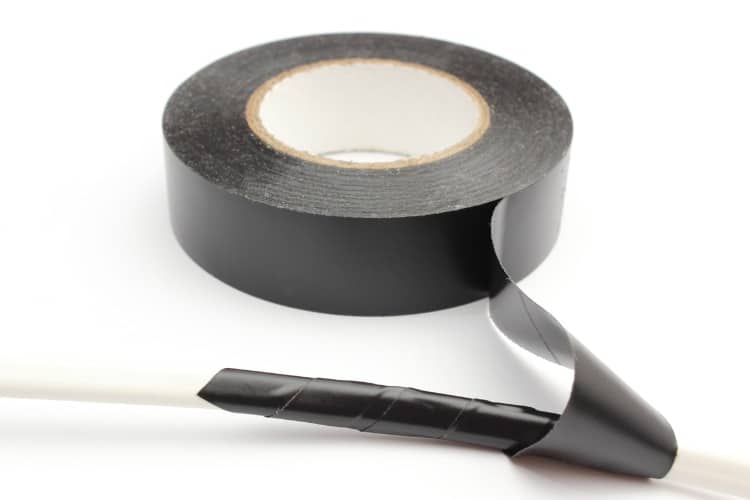 On the material front, both tapes have their distinct advantages.

While electrical tape is made of polyvinyl chloride (PVC), duct tape has a triple layer composed of three materials.

Electrical tape’s material gives it a stretchy quality, which is useful when working with electrical components and wirings.

This also makes electrical tape more difficult to tear off.

While the lower layer of duct tape is made with a rubber adhesive, the middle layer consists of fiber fabric.

This gives it the strength that electrical tape lacks.

The top layer is coated with polyethylene plastic, making it easy to handle. 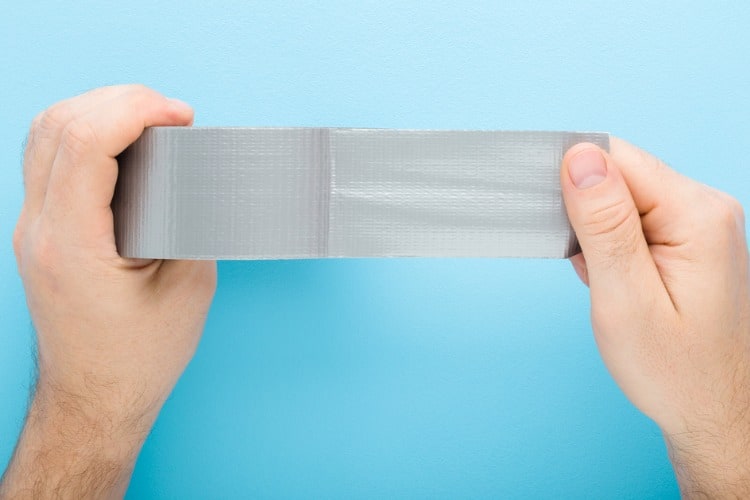 While dealing with tensile stress, duct tape is a clear winner because of its multi-layer composition.

The fiber fabric in duct tape is very strong and helps keep things together – the tape has been made for this purpose.

On the other hand, electrical tape is not quite the go-to object when you need things to stay together in the face of tensile stress.

But that’s not a concern as this tape has a different use, i.e., joining wires, preventing them from touching, and safeguarding them from the elements.

However, standard electrical tape is rated for 600V maximum operating voltage and can withstand 176 degrees Fahrenheit (80 degrees Celsius) of heat.

Electrical tape is quite obviously the winner in terms of heat resistance and electricity handling.

While it may not seem like an important aspect, colors are necessary to categorize and distinguish between certain elements when you’re using duct or electrical tapes.

I tend to use them on storage boxes kept in my attic to keep things organized.

Electrical tape has a more functional use of color.

While it usually comes in black, there are color variants like white, red, green, or yellow.

These colors are used for distinguishing specific wires.

The simple fact is that duct tape can’t fix everything, contrary to popular belief.

Yes, it is strong, and it can help with many day-to-day problems that need quick fixes, like patching a window screen in a pinch.

However, duct tape isn’t made for any sort of electrical work.

As mentioned before, one of the layers in duct tape is made of cloth fibers.

It’s not been made to handle electricity or heat and will lose its adhesiveness over time.

It also carries a high risk of catching fire. 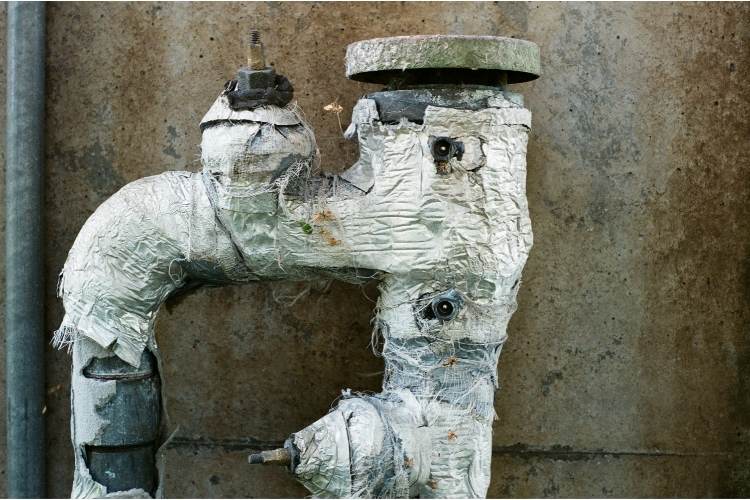 Apart from being a fire hazard, duct tape is also not flexible enough to wrap around the wire.

And the fact that it can’t insulate wires means that you’ll be at the risk of electrocution.

In contrast, electric tape has been made exactly for this purpose— it can deal with high voltages of electricity and resist heat.

The stretchy material of this tape also helps it insulate wires properly and completely.

Don’t be too disheartened bout being unable to use duct tape, though.

There are a couple of other electrical tape substitutes that are safe to use.

Wire nuts are useful in connecting two electrical wires when the electrical tape is unavailable.

They are also called wire caps or wire connectors.

Wire nuts are basically insulated plastic caps that can be twisted and attached to the end of a stripped wire.

They also come in different sizes – see our wire nut size chart – I usually keep several common sizes at home because I never know when I might need some. 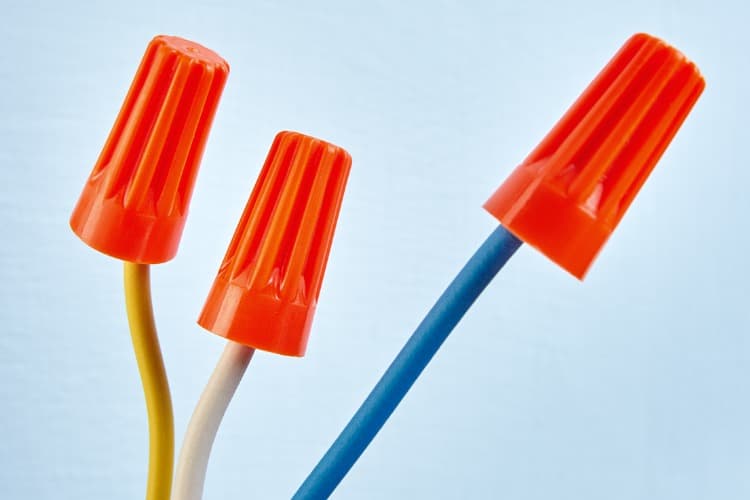 Heat shrink tube is another device that can be an alternative to electrical tapes.

Not sure what it is? It is a tube that shrinks when exposed to a certain heat level.

These tubes are, however, usually used for thicker gauge wires. They also require a heat gun to be shrunk. 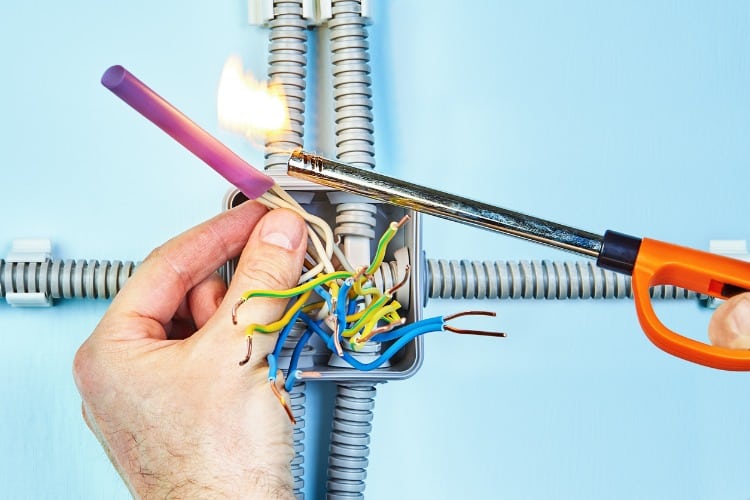 No, standard electrical tape is not waterproof. It is water-resistant, though.

You can, however, purchase waterproof electrical tape, should you need it for a project.

Electrical tape that is rubber-backed will offer the most water resistance.

Will An Electrical Tape Catch Fire?

A good quality electrical tape can withstand heat up to around 176 degrees Fahrenheit, or 80 degrees Celsius; anything above that and the electrical tape will most likely catch fire.

However, the wirings of your home appliances will never reach those temperatures, so you can safely use electrical tape at home.

In conclusion, always remember to use the appropriate tape according to your needs.

When it comes to electrical-related issues, you should only use electrical tape, and if that’s not available, then consider wire nuts or heat shrinking tubes before reaching for duct tape.

I hope you found this article helpful!