Do you want to mount your brand new television on your living room wall?

Do you need a new home for your expanding book collection, so you want to build a shelf up against the wall?

These interior design projects are simple enough—all you need to do is drill some holes in your wall, put in some screws, and you’re done. Right?

Why You Need to Know About Your Electrical Wiring

Haphazardly drilling into any wall is incredibly dangerous. Your electrical systems and wiring run throughout your home, and yes, they are located inside your walls.

Even hanging a simple picture frame can be hazardous if you hammer a nail into the wrong spot.

Electrical accidents are deadly, whether they lead to electrocution, a short circuit, or an electrical fire that will endanger everyone in the house.

I think I’ve made it clear how important it is to make sure you don’t hit wires while drilling or doing any DIY project.

But how to find a wire in a wall? I’m here to help you with that!

Tracing Electrical Wires in Your Walls

When you know where your wires are, you can easily plan home improvement projects, make interior decoration decisions, and arrange your appliances so you will not overload your electrical system.

You can use various methods and tools to trace electrical wires within your walls.

Here are a few of them:

Stud finders detect the studs that support your walls. Magnetic stud finders are incredibly popular for homeowners and professionals alike.

A magnetic stud finder has a magnet that detects the nails and screws that make up your wall structure.

Just hold the stud finder against the wall you want to work on, and move it around horizontally.

Wires are usually installed in this alignment, so it will be easier to track them down.

Each time the magnetic stud finder goes off, mark the area with painter’s tape. Once you’re done, you will have a good idea of which areas to avoid when you drill into your wall. 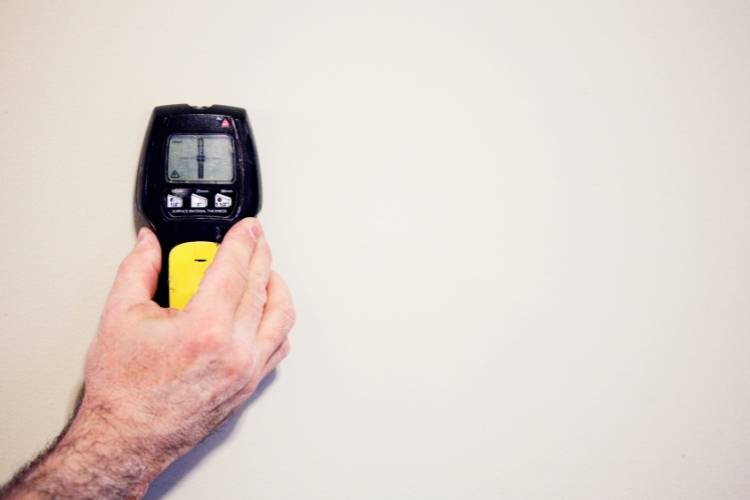 An electronic stud finder differs from a magnetic one in that it produces an electrical field that changes when it passes over a wall stud.

The most convenient tool to locate electrical wires is a stud finder that features AC wire detection.

These stud finders can also help you detect electrical currents behind walls. You will be able to tell where the wires are and the direction they’re going in.

Move the electronic stud finder along your wall horizontally. When it detects a stud in the wall, go off with a blinking light or a sound.

Whenever you get a signal from the finder, mark the area to know which parts of your wall to avoid.

3. Use a Scope Camera

While stud finders can be extremely helpful in finding studs, and ultimately electrical wires, behind your walls, you may want to see what’s there with your own eyes.

If you don’t mind a small temporary hole in your wall, this tool will work best for you.

With a flexible scope camera, you can take a peek inside your wall.

You will know the exact locations and directions your wiring system runs through.

When you can see where everything is, you can rest assured that the areas you choose to drill or hammer into are perfectly safe.

Remember that the areas within your walls are pitch dark. You should invest in a scope camera with a bright light attached to it.

If you want to invest in a slightly more costly camera, you can get one with night vision.

Consider the video quality before buying a scope camera—grainy footage will not be useful when you’re looking for wires behind your walls.

Your camera should also be flexible enough to get around obstructions and turn sharp corners to capture your complex wiring system.

Take a close look at all the features and read customer reviews of the camera you plan on buying before you make a purchase. 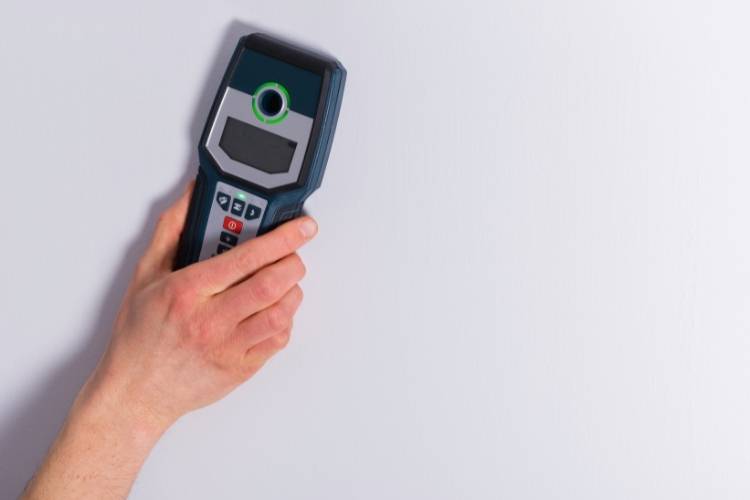 This tool emits a signal when it detects an active electrical current.

Certain detectors will work only through drywall, while others can find wires even through concrete.

Plug your wire detector into an outlet nearest the area you want to inspect.

If you have a live wire detector, it’s best to switch off the circuit breaker for that section of your house.

The device consists of two parts: the transmitter and the receiver.

The transmitter goes into the outlet, and it will deliver a signal throughout the system of wires in that wall.

The receiver will then pick up that signal and show you where the wires run.

Move the receiver horizontally to find the wires within your wall. It’s best to begin from the outlet and move outward.

Hold your receiver in the optimal position against the wall for an accurate reading.

When you detect an electric signal, mark that area with painter’s tape so that you know where to avoid drilling. 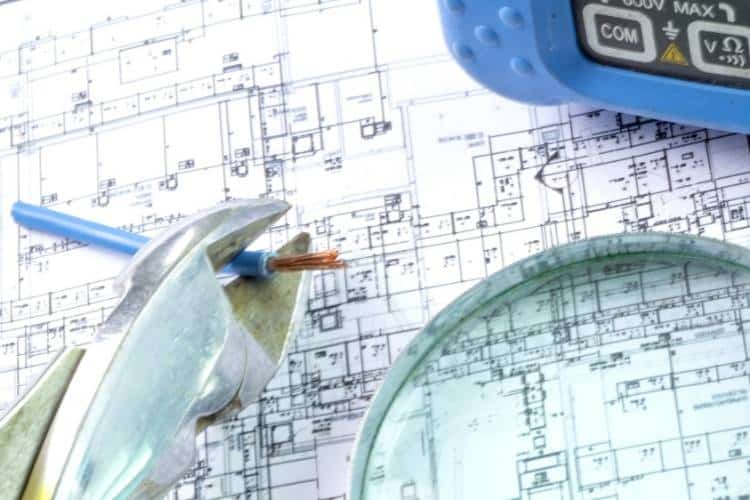 One of the easiest and most convenient ways to find wires in your walls is to obtain the existing electrical blueprints of your home.

These plans will give you an accurate map of all wire placements. You will also know which circuit breaker is connected to each room in your house.

If you’re planning on modifying your electrical circuits or making extensive renovations all around the house, you will need these blueprints.

Stud finders and wire detectors will not be enough to give you a clear picture of your entire electrical system.

You can obtain these blueprints from the local government or your construction company. 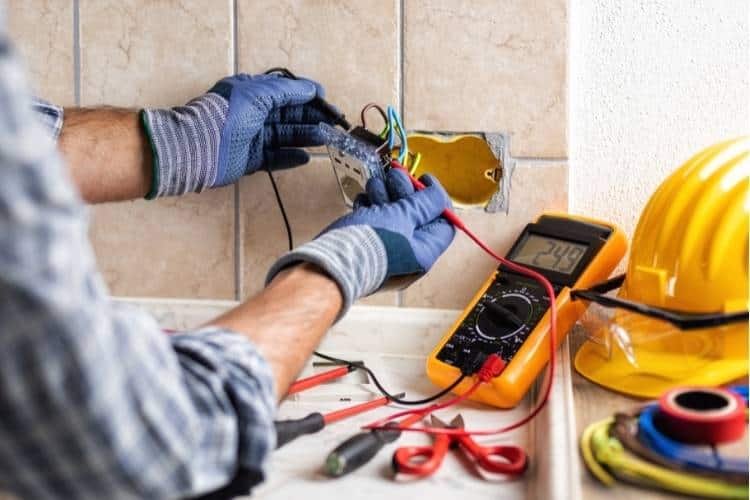 There is always some risk involved when working with electrical components.

Make sure to adhere to basic safety measures when you look for wires within your walls.

And make sure you have been thorough with your detection before you begin drilling or hammering into your interiors.

Unplug your appliances before you shut off the circuit breaker in the area you’re planning to probe for electrical wiring.

Keep a flashlight handy in case you don’t have enough light as you work.

If you’re planning to make a small hole in the wall for a scope camera, wear gloves and safety glasses as you handle your tools.

Avoid contact with the wall’s interiors if you’re unsure whether the wires are live or not. Consult a professional electrician if you’re doubtful about the process.

How to Trace a Broken Electrical Wire in Wall?

Broken electrical wires behind a wall are common household issues.

These are often caused by worn wiring due to aging or rats and other household pests chewing through the wires.

The way to trace a broken electrical wire is with a standard multimeter that measures current, voltage, and resistance.

Turn off your circuit breaker before attempting to find the broken wire—the multimeter will send its own signal when in use.

Trace your wall carefully, the way you would use a stud finder or electric wire detector.

The area with zero resistance is where the broken wire is located.

How to Trace a Wire Without Power?

You can use magnetic or electrical stud finders to trace wires in your walls.

And if you want to find out if a certain wire is live, you can use a voltage detector or neon circuit tester.

These tools can also help you trace specific wires if they are tangled with others within your wall.

How Do You Find Electrical Wires in Drywall?

You can use an electrical or magnetic stud finder, an electric wire detector, or a scope camera to find electrical wires in drywall.

To get the most accurate readings from these tools, position the devices flat against the wall.

Remove any jewelry and keep your smartphone away from the detector.

Charge your equipment before using them—devices that are low in power may deliver false readings.

How to Find Electrical Wires in Concrete Walls?

You will need electrical wire detectors or stud finders that can scan through concrete walls.

They are very different from generic wire detectors and stud finders, and they are more expensive.

If you have the electrical blueprints of your home, you will know exactly where electrical wires lie without the use of detection tools.

There are quite a few ways how you can find a wire in a wall. You can use different stud finders, an electric wire detector, or a scope camera.

It’s important to know which device suits you best according to your needs and expertise.

Once you have a map of the wires in your walls, you can go ahead with a worry-free renovation or decoration project!