It’s been said that water damage causes most home repair expense. And a leaking shower is surely one of the top culprits.

A shower that leaks can become a large issue because we take showers daily, so that means a shower leak can lead to a lot of dripping water fairly quickly.

It also means that we can get stuck if we need to wait while the shower leak gets troubleshooted and repaired; in other words, a potentially big inconvenience.

Now, while it may seem obvious that a water leak coming from a shower stall can be pinpointed immediately, many times it is not. Showers can leak from the pan (the so-called tub of a shower) or the shower doors for example.

The fact of the matter is there are so many places where a shower can be leaking from that you really have to take a ‘process of elimination approach’ before implementing your fix.

Fortunately, there are ways to do this. These are in fact, methods that would be used by a plumber hired in to fix your leaky shower.

Let’s go through these and find the best way to repair your leaking shower DIY style.

If your water leak is coming from your shower floor, then it may be obvious already you have a broken shower pan.

Check for cracks, even very fine ones, anywhere on the pan. If you find some, you’re in for a new shower pan or shower floor to stop the leak.

If your pan or floor looks good, try this basic step. Stop up the drain and fill the pan with water and let it sit. If no water drips out below (check closely with a bright light), it may not be your shower pan leaking.

Let’s check for the next possibility. 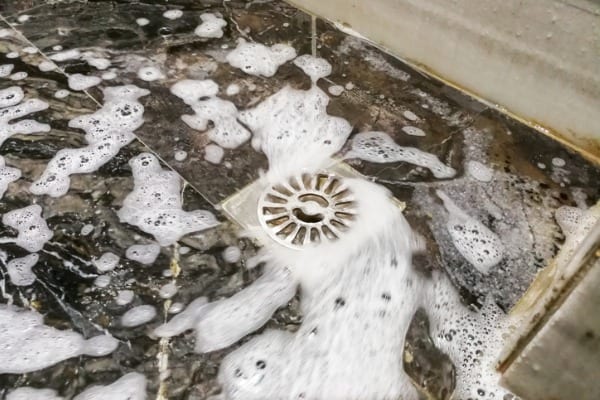 If you suspect it’s your shower drain that leaks, try this test:

If you have a leaky shower drain, you’ll know and it’s time to call a plumber.

If you want to take this repair on yourself, be prepared to remove your shower stall or pan unless you have easy access to the bottom of your shower from the floor below.

If no leaking has occurred after trying these first two steps, then you know that your shower pan is not leaking and a shower drain leak is not your enemy.

After you’ve tried the above two tips, it’s time to test if your shower valves are leaking, or if any of the water supply pipes might have sprung a small leak.

Note, if you hear noisy, hammer sounds in the pipes this is usually not a cause for leaking water.

To test, turn the shower on (both hot and cold) and carefully monitor leaking water under the shower. As a precaution, direct the water into the drain only since you’ve tested this already and not at any walls or shower doors.

If your ceiling below the shower is unfinished, you’ll be able to see just where water comes out if it does. If not, it may be worth cutting a hole into the finished ceiling (don’t worry, drywall is easy to repair), so you can get a better visual.

If it’s dry, move on. If you spot water, then it’s time to call a plumber.

As above, if you want to further investigate the repair yourself, you’ll need to access the shower pipes from the wall behind the shower.

If it’s a shower valve leaking, it’s possible you can get at it from inside the shower, but you may have to chisel away some tile to get it at, for example.

Sometimes a shower leaking water can be due to the doors simply not doing their job of containing over-spray and splashes from showering.

Leaking in this way can be caused by the doors being too short or not closing all the way, in which case you’ll see the obvious puddles on the bathroom floor.

One problem may be in the door tracks themselves. Tracks are supposed to be waterproof canals that can fill partially up with water during bathing.

Tiny outlets called weeping holes along the track allow this accumulated water to enter back inside the stall.

Check that these holes are not clogged by debris or hard water build-up. You may even benefit by drilling out these holes to make them larger, or adding a few extra holes along the track.

Where the tracks join the shower door frames at the walls, check that they are adequately sealed with bathroom caulking. It doesn’t hurt to add extra caulking at these joints.

The product at the right is great for adding to your shower doors to help seal them properly.

If your shower water leak hasn’t revealed itself with the above tests, then it’s entirely possible that water is leaking out through the tile on the shower walls.

Check that all grout between the tiles is in place, not cracked and appears sealed. Do the obvious fixes (replacing and/or patching) if necessary.

Keep in mind that even the smallest of cracks and even tiny holes can let more water through than you think.

If Leaky Shower Problem Is at the Faucet

If you have this issue, then chances are your water leak isn’t getting out of the shower thankfully. This problem can be annoying and surely not a way to save water during a shower.

You’ll need to replace some simple hardware. What’s required looks and sounds worse than it actually is.

Follow the directions here to replace your leaking shower diverter. That will definitely solve your problem. 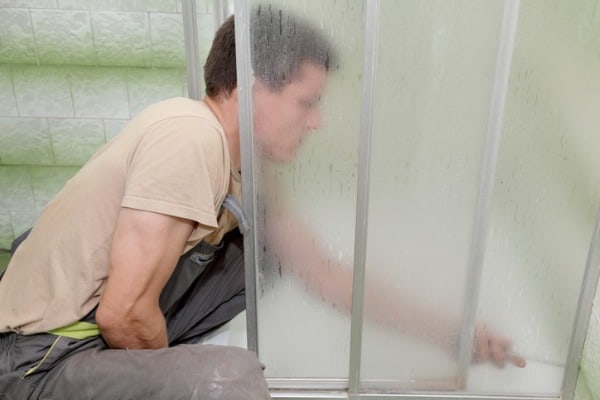 Remember to also check all the joints in your shower, such as where the bottom of the walls or shower door track meets the pan.

These should be sealed with caulking; no cracking or missing caulking should be accepted!

Also, inspect what’s called the escutcheon plates, the plates that go around the shower handles and knobs. Pop them off and check that any seals are intact.

You don’t want a leaky shower caused by water getting in behind these valves and running down the wall.

Finally, one of the most common complaints in the shower are leaks from the shower head itself. These fixes are easier than you think, so check out the previous link to shore up any issues there.

How Do I Find Out Where My Shower is Leaking From?

The best way to figure out where your shower is leaking from is to go slow and wet down each part of the shower individually.

Wait for the shower/leaking water to dry between each step and check around your floor (and ceiling below if needed).

Using a bucket with water, pour it down one shower wall. Wait for it to settle and then check for leaks. If you find a leak, seal it up! If not, move to the next wall.

Pour water down the door of the shower. Wait a few minutes and check if water has seeped through the bottom.

Also check any grout, caulking, or sealant around the doors for damage to repair.

Run water through the showerhead and faucet. Make sure nothing is clogged and the fixtures are tightly installed.

If leaking through the floor happens after running the water, your leak could be in the pipes next to or below the shower.

Seal the drain and fill the bottom of the shower with water. Note how high the water is and wait about 15 minutes to check back. If there is less water, the drain is leaking.

How to Prevent Water from Leaking Outside a Shower Curtain

The first step is to make sure you are using both a shower curtain and a shower liner.

Shower curtains are usually made of fabric and should hang on the outside of the shower or tub.

A shower liner is made of plastic and hangs on the inside of the shower or tub.