So, you’re taking a shower, and you notice the spray is weak. When you look down, you see that not all of the water from your pipes is making it to your shower head.

In fact, a good amount of it is leaking out of your bathtub spout. And that water is just going down the drain instead of hitting your body.

Even if your tub spout just drips or dribbles a little, you probably don’t want to waste this water.

It’s not like you’re shower is leaking outside the tub – it’s just more of an annoyance. 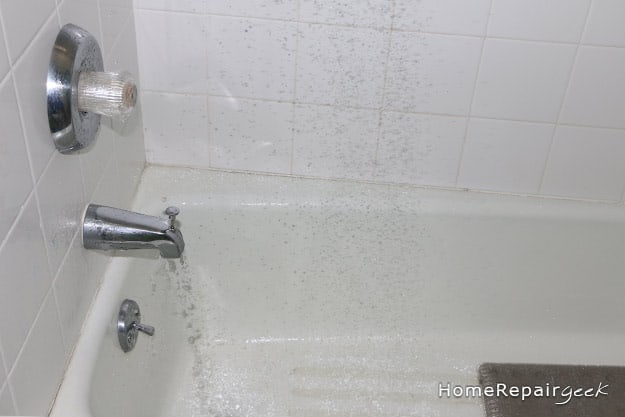 How do you fix this?

Even if your tub spout just drips or dribbles a little, you probably don’t want to waste this water. It’s not like your shower is leaking outside the tub – it’s just more of an annoyance.

How do you fix this?

For this article, we’ll assume your bath and shower has a tub spout and a shower head, and that you pull up or push down on a little knob on your bath’s tap to route water either to just the tub or up the shower head.

This little knob is what’s attached to the shower diverter and no matter how hard you pull up, you just can’t stop the tub spout from leaking!

Don’t worry. There’s hope for this as a simple DIY fix. Read on and learn just what’s going on and how you can take charge and get a full stream of water for your showers again.

What Is a Shower Diverter in a Bathtub Anyway? 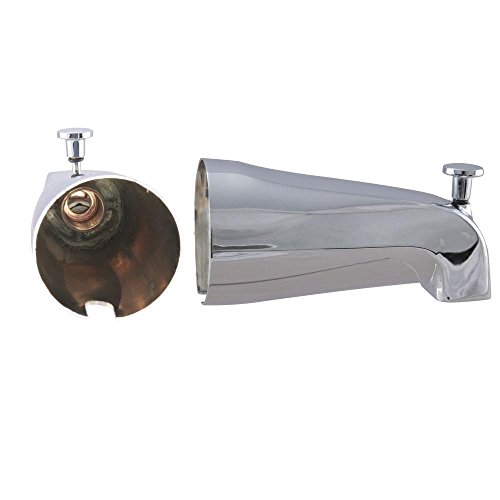 Well, we know what a shower diverter does in keeping water from going into your tub when you’re taking a shower. You’ll this setup when your bath has a combination shower/tub faucet.

The shower diverter does it’s job simply by raising and lowering a small gate (called a diverter gate) to either block or allow water from coming through.

It stops doing a good job of this when it gets worn, corroded, stuck or blocked. When parts wear out or are so compromised by hard water build-up there isn’t much you can do to fix or even replace the small parts inside.

Your only hope is to get a replacement spout such as one like these, which of course comes with a whole new diverter and lever.

How to Fix a Leaky Shower Diverter in Your Tub Spout 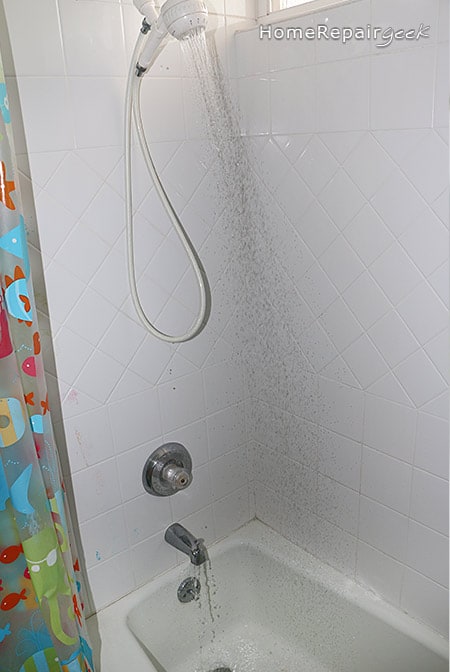 With a faulty or broken shower diverter valve, your only choice really is to replace it instead of actually fix something within this mechanism.

What’s more, is that you can’t just replace the diverter valve itself; you’ll need to buy and replace the bathtub spout altogether.

Rest easy, because these usually aren’t that expensive. Like any bathroom component, the more designer something is the higher the price.

The good news is that you can simply remove your old one so you’ll know which kind to replace it with. Before going forward, you can always take a quick look inside the end of your spout at the diverter valve components with a flashlight and see if there are any obstructions in there that can easily be removed.

If you do see something in there, remove it and test out the diverter and your shower. Chances are though that it’s ready to be replaced, especially if it’s stuck in position.

Here’s How to Replace the Spout

Remove the spout from the wall

Look under your spout and see if there is a little hole or opening near where the back of the spout meets the wall. If there is, then you would use an allen wrench (hex key) to unscrew the little screw inside there.

This will allow you to pull the spout directly out from the wall. Be sure to cover the drain so you don’t lose the screw!

No hole with a screw? 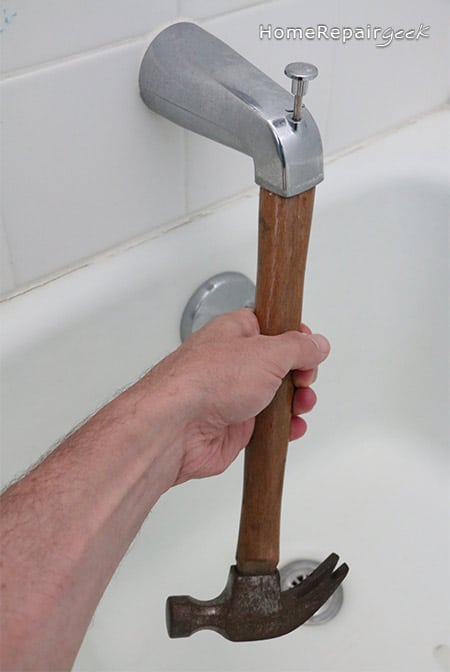 If you don’t have a hole and screw at the “‘under belly” of the spout, then you will need to twist off the spout with your hands.

Do this by grabbing hold and twisting counter-clockwise. If the spout doesn’t budge, then insert a stick of solid wood or the end of a hammer and turn the spout with this added leverage.

Don’t worry about bending it as you’ll soon be replacing it. If your shower and bath diverter spout was sealed with caulk, you can cut through this with a utility knife to make removing easier.

Get a matching spout

When the spout is off, just make sure to match the same type when getting the new one.

For example, if you had to twist yours off, then check that the threaded inlet hole on the new shower diverter spout is in the same position and is the same size diameter as your old one.

How Do You Fix a Shower Diverter Push Button?

How Do I Know If the Leak Is the Spout’s Diverter Gate or the Shower Valve Itself?

You can tell what’s leaking by noting when the water is leaking.

The spout diverter gate is what controls the water coming out of the shower or the tub spout while the valve is what turns on and off the water in general.

Here’s what to do to figure out what exactly is leaking:

First, turn on the water in the tub and then divert the water to the showerhead.

If you still have water coming out of the tub spout, as well as the shower, it’s your spout’s diverter gate that has gone bad and needs to be fixed or replaced.

Second, turn off the water and check if your shower head or faucet is dripping.

If there’s still water dripping out after you’ve turned it off, your shower valve has worn away, is not sealing well, and is causing the leak (and not your shower diverter!).

I will join the mass of others that message, "Where are the pictures?" On the other hand, thanks for what is presented.

I currently have a 3 handle tub/shower. The middle handle diverts the water from spout to shower head. But I still have water leaking from spout when water is diverted to shower making shower very weak. I replaced the transfer valve in middle handle and that didn't work. My current spout does not have a diverter on it. Can I replace it with one that has a diverter? Any suggestiions?

You should also include the in-the-wall diverter Price Pfister 910-385. I have bought a replacement stem, but obviously the position of the open vs closed (bath vs shower) position is critical for daily operation--but what is the right position or installation? Price Pfister does NOT tell us...also, it seems no one else in the internet is either. HELP on a Sunday morning!

i have a shower head that runs and the tub spout also runs. i replaced diverter and the seat, all it did was slow the water flow down. don't know what else to do?? any suggestions, it is a price pfister