If you notice your washing machine, dishwasher, shower, or any indoor or outdoor faucet in the house causes your water pipes to make noises, especially when turning water off, you’re not alone.

And since you’re not alone, it means there is a common problem that is causing these noisy pipes in your house.

Let’s describe the type of noisy pipes to make sure this is your same problem: pipes could be said to be banging, rattling, clanking, hammering, vibrating, knocking, pounding, shaking, etc.

If this sounds like your noisy water pipes then read on.

We know that a water main brings water to your house and then through a series of water pipes to deliver water all around your house.

This water is generally under great pressure; nothing your plumbing can’t support and definitely not something that causes any loud noises in the plumbing.

This water pressure makes it possible for water to flow instantly out of a faucet when we turn it on.

As soon as we open a valve (or an appliance like a washer does), the water floods through your pipes and out the open end.

Again, aside from the sound of water rushing through pipes or out fixtures, there is nothing strange about these sounds.

But what happens when you suddenly stop this flow on either your cold or hot water pipes?

The water that was once rushing through your pipes suddenly meets 100% resistance, slamming into the closed valve.

This pressure stacks up a good amount of energy that has no where to go except backwards. Water reverses direction on itself, now carrying some extra energy that, unless has someplace to go, will release itself by vibrating your pipes.

Now, if pipes are tied down or braced, you may not notice too loud of sounds.

Generally though, there is going to be on area along the many feet of piping where the energy is released because pipes aren’t secured well, and you hear the result: noisy, rattling pipes, called “water hammer.”

It’s worth noting that while noisy pipes may seem harmless to your plumbing, the shocks generated from water hammering can cause stress to your pipe joints, weakening them over time.

How to Fix or Stop Noisy “Hammering” in Your Pipes?

Fortunately, newer homes have remedies in place for “hammering” pipes due to what is described above.

But if you’re reading this, chances are your home is older, with older plumbing.

‘Modern’ homes have in place what’s called a water hammer arrester. These little devices are affixed directly onto your pipes and are about the size of softballs if round, or a banana if cylindrical.

What they have is a small chamber divided in two by a rubber diaphragm. On one side is water and the other, air.

When the water that’s charged with the energy gained from a suddenly closed valve hits the diaphragm, it dissipates by vibrating the rubber diaphragm back and forth.

And it does this without making any noise!

Here are some examples of a water hammer arresters – click here and here for ball-shaped type. 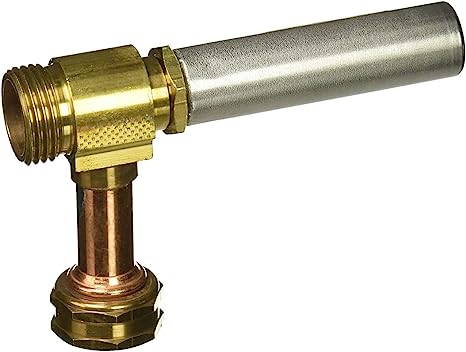 While it looks a little funny, this little device certainly does the trick. Order one today, and silence those pipes once and for all.

Your fix then is to install a water hammer arrester in your plumbing. While a plumber can easily do this for low cost, this is not as difficult as it sounds. Here are some general tips:

Small noises here and there are not usually dangerous.

But if your pipes are making loud, continuous rattling noises it may mean there is something loose or broken and could be in danger of bursting.

Broken pipes can cause a lot of water damage, so make sure to get a plumber in there to take a look at everything before more damage happens.

Why Do Pipes Rattle When Showering?

There are a couple of different reasons why your pipes rattle while the shower is running.

First, your water pressure could be too high and is vibrating the pipes.

The quick change in pressure when you turn it on can loosen your pipe fittings, so make sure to adjust your water pressure regulator if needed.

The most common reason your pipes are rattling is that showering uses a lot of hot water.

Hot water rushing through cold pipes will make the pipes expand and rattle against any studs or pipes nearby. This is especially common if your pipes are made of copper.

The expanding pipes can sound like rattling, hammering, or even squealing.

You’ll know this is your cause if the rattling stops after turning off the hot water.

These do not go bad and are meant to last the life of your plumbing, so you really shouldn’t have to replace them.

If you are hearing more water hammering than usual, the water pressure is most likely too high, and you need to check the regulator.