Working out which of the variously sized and shaped bolts in front of you is the one you need can be quite daunting.

Add to that the difficulty of deciphering all of the figures and terms in a bolt size chart, which is nothing short of excruciating.

Do you need to take your chances with any bolt that goes in the hole or give up the task altogether?

Whether you’re working on a DIY project or a construction job, what you need is a proper and basic understanding of how to use a chart for bolt sizes.

That way, next time you’re using bolts, you can take a quick look at the chart and find out exactly which one to use.

In this article, before we look into step-by-step instructions to read a bolt size chart correctly and quickly, we’ll first learn about some essential bolt physical characteristics and dimensions.

Overview of Bolt Size Chart(s) and How to Read Them

Part of what makes bolt size charts difficult to read is not knowing what the words and numbers mean. So, let’s look at some bolt proportions and dimensions.

Any bolt can be divided into two main parts: the body and the head.

Let’s start with the bolt body.

The bolt body is the main shank with full or partial threads. It most likely looks the same for all bolt types.

Keep in mind that when I say bolt size, I refer to the bolt’s shank, not the head.

You’ll most likely need to know the bolt head diameter to determine the wrench size to tighten or loosen the bolt.

The bolt body has three dimensions that are essential to any bolt size chart: bolt diameter and thread pitch.

In standard bolt size charts, the thread pitch is the number of threads in one inch. In the metric system, it’s the distance between two threads in millimeters.

The thread pitch can be further classified as coarse, fine, and superfine. You’ll most likely use coarse threaded bolts, which have a lower thread count.

For projects that require high holding power, you can use fine threaded bolts, which have more threads and can withstand pressure. 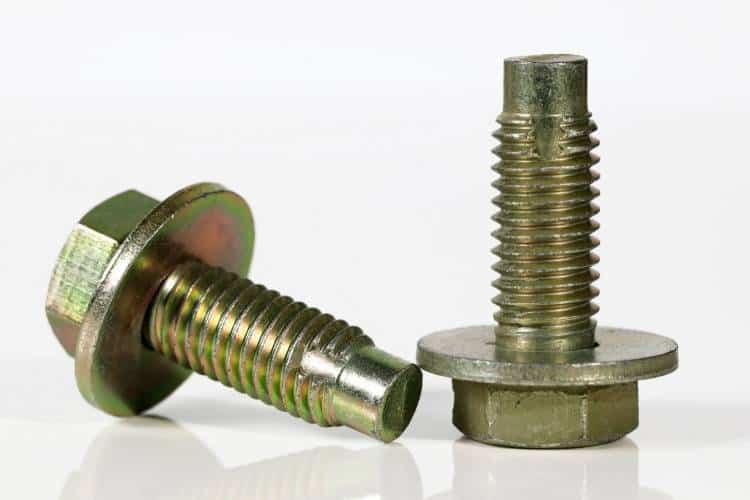 If the bolt body is the same for all bolt types, then the head is the complete opposite. Bolt heads are usually hexagonal, square, or circular.

Still, there are some oddly shaped bolts out there.

Bolt heads have three essential dimensions: size across the flats, across the corners, and head height.

The bolt tensile strength is another essential bolt specification. It’s the maximum stress a bolt can handle before it breaks.

In the standard chart, a bolt’s tensile strength is represented as grade radial marks on top of the bolt’s head.

These grade marks are given depending on how many pounds per square inch (PSI) the bolt can hold.

As a rule of thumb, the more lines a bolt has, the greater its strength.

In the metric chart, tensile strength is written as class numbers on a bolt’s head. The higher the class number, the greater the bolt’s strength.

Every metric bolt is assigned a class number in terms of megapascals (MPa).

How to Read a Bolt Size Chart

Now that you’ve got the terminology out of the way, you can look at bolt size charts with more ease.

Generally, the first column of a well-made comprehensive chart like the ones below or a size chart pdf contains the nominal bolt sizes.

In the standard size chart, the bolts are labeled as fractions, which happen to be the bolts’ diameters.

The bolt sizes are labeled differently in the metric size chart. You’ll notice that they all start with an ‘M’ followed by a number. That figure also refers to the bolt’s diameter.

In the second column, you have the bolt diameter in decimals or whole numbers. In both charts, there’s a minimum and maximum diameter for each bolt.

The next three columns contain the minimum and maximum sizes across bolt flats, corners, and head height.

The sixth column in both charts is the second most essential bolt dimension. For standard-size bolts, the thread pitch is either fine or coarse.

Most of us are more familiar with standard measurements. That’s why we have an additional column in the metric chart below: the Standard Inch Equivalent.

This column is to help you quickly find the equivalent or approximation of metric bolts. 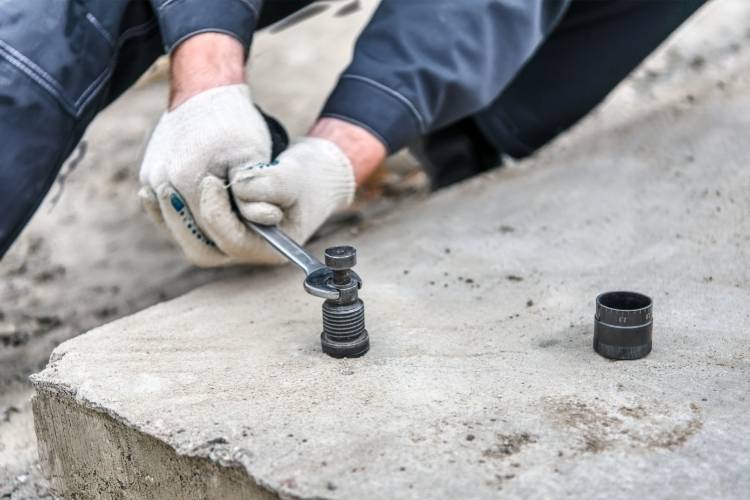 Similar to the size charts, the tensile strength charts are predominantly the same, but with different measurement units.

The second column has the tensile strength of each grade measured in PSI, followed by the yield strength in the third column.

Lastly, the fourth column contains the most common material used in these bolt grades.

As for the metric chart, it more or less follows the same format until the third column. Instead of the yield strength, the third column contains the tensile strength measured in PSI.

This isn’t the only thing that’s different, though!

Just like the metric bolt size chart, the metric classes chart has an additional column that contains the standard grade equivalent.

We refer to metric bolts using ‘M’ sizes followed by the diameter, thread pitch, and length. Here’s an example of a metric bolt specification: M5-1.0 x 20.

Now let’s break it down:

That said, it’s common to see abbreviated metric bolt formats, such as M14-50. When the thread pitch is dropped from the specification, it means that the bolt is coarse-threaded.

‘Why is this math lesson necessary,’ you say. Well, if you know a hole’s size in inches, but you’re using a metric bolt, you’ll need to do some calculations.

Based on the results, the metric bolt size chart shows that you can fit an M14 bolt into the 13mm hole.

If you want to convert millimeters to inches, you can either divide the figure by 25.4 or multiply it by 0.0394.

Common Bolt Types and Their Sizing

While almost all bolts have the same body diameter size measurements, there are other dimensions to consider depending on the shape of the bolt.

On the other hand, bolt torque size charts have many variables and different measurements for each bolt grade/class. 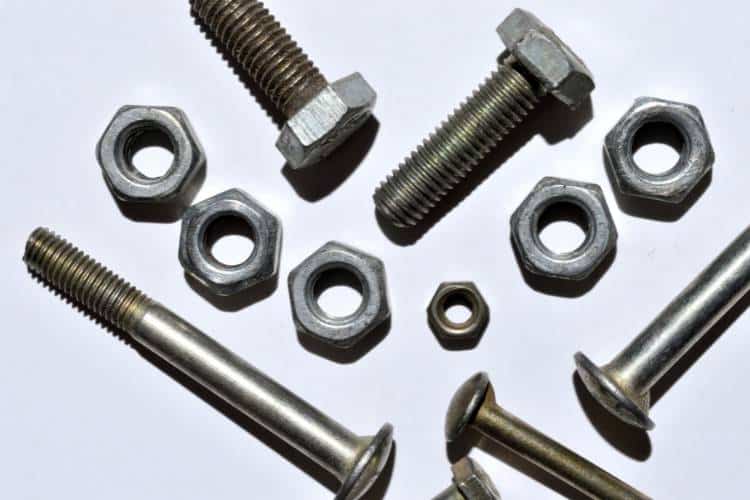 Now that we’ve covered all the technical aspects of a bolt size chart, let’s look at an example to cement this information.

Say you’re building a treehouse, and you have a hole that fits the following description:

It sounds a bit confusing, right? No need to worry, though, because these are clues that you can work with.

First, look at the chart and find bolts that have a half-inch diameter. You can see that 1/2 in. bolts and 9/16 in. bolts fit the bill.

The next clue narrows things down for us. Check the Head Height/Thickness column to ensure that a bolt lays flat to where it’s screwed.

Finally, you check the Thread Length column for our 1.25 inches deep hole.

In general, the first thing that you should do is consider whether you’re using a bolt that’s shorter or longer than 6 inches.

What about using a metric bolt size chart?

You can use the same method to read a metric chart, but keep in mind that all measurements are in millimeters.

In some cases, you might need to do some conversions if you’re working with inches.

For the most part, however, the metric charts have columns that list the equivalent or approximate sizes to the standard bolt sizes.

Now, let’s take a look at some bolt size charts that cover both the standard and metric measurement systems for bolt dimensions as well as bolt tensile strength.

Remember that the standard bolt size equivalent is an approximation, not a direct equivalence.

These charts can give you a general idea of the tensile strength of standard and metric bolts as well as the material they’re most likely made from.

Bear in mind that, while most bolts are made from carbon steel or alloy steel, bolts made from stainless steel exist.

There are other common bolt materials as well, including:

These metals are pretty strong and resistant, so don’t worry if you can’t find carbon or alloy steel bolts. Just make sure you’ve got a high bolt grade or class.

What are the strongest bolts?

The answer to this question depends on what the bolts will be used on.

For general use and DIY projects, grade 8 bolts are the strongest options available.

These bolts are usually made from quenched and tempered medium carbon alloy steel, so they can withstand a tremendous amount of pressure.

If you need bolts for higher tensile jobs, then class 12.9 and 10.9 are the strongest bolts. They’re commonly used in automotive applications and construction.

What materials can you use a bolt on?

You can screw bolts on anything from drywall, metal, wood, to steel. You can even use it on concrete.

You can also screw bolts on two different materials, such as fastening wood to metal.

Because of their great holding strength, bolts have a broad range of use compared to other fasteners.

When you fasten a bolt into a threaded hole, it holds the materials like a clamp, which prevents any sliding.

What happens if you use the wrong bolt sizes?

If you use a bolt smaller than the hole it should go in, the bolt may fall out.

On the other hand, if you use a bigger-sized bolt that you need to use enough force to push it in, you can damage the hole.

Then, when you unscrew the bolt, you won’t be able to use another bolt in place.

Whether you’re a DIY enthusiast, an engineering student, or an experienced machinist, you’re probably aware of how much more sturdy your project can be with the right bolts.

The good news is that you can now confidently say that you know all about bolts and bolt size charts.

So, next time you’re working on a project, you can acquire the bolt dimensions that you need easily.