Whether you want to operate two different light sets or a ceiling fan from the same location, having a double light switch is essential.

To do that, you’ll need to take care of two things: removing the old switch and rewiring the new one, and that’s where this trusty guide comes in!

Below, we’ll show you exactly how to replace a double light switch in simple steps, helpful tips and the safety pointers you need.

You’ll be on your way to a switch with double-duty in no time!

Before replacing the old switch with a new “combination switch” (a single switch with two toggles) or a two-gang switch, you should first have a better understanding of double light switches and how dual switch wiring works

Here’s exactly what you should know:

When you hold a new double light switch for the first time, a standard one will have 2 black screws on one side and two gold screws on the other side.

Ideally, a light switch circuit will have 3 colors of wires.

This is known as the “load wire” or the “hot wire”, which is the one that carries the electric current from the electricity source and through the switch.

This one is called the “neutral wire”, which is the one that carries the electric current back from the appliance to the power source, closing the circuit.

This one is known as the “ground wire”, which is a safety wire that provides an alternative path for electricity in the case of an electric short.

Any other wire colors shouldn’t be connected in double light switches because they’re designed for 3-way and 4-way switches. 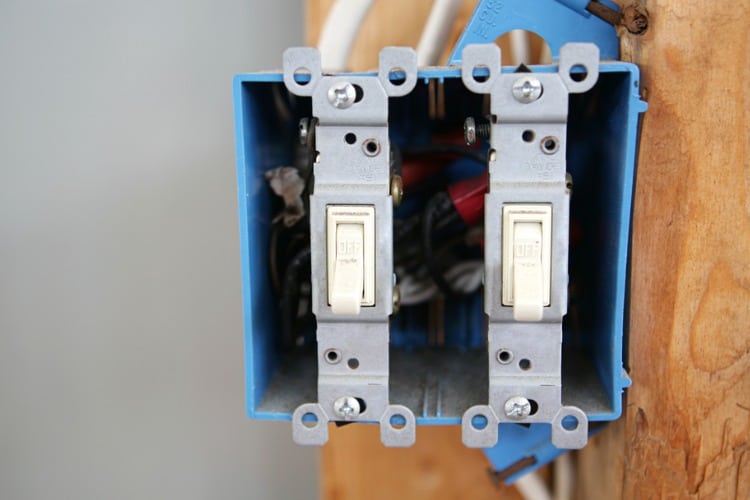 How to Replace a Double Light Switch

Now that you know more about how double light switch wiring works, here’s how you go about installing one.

Step 1: Prepare All the Essential Tools for the Job

To save yourself the hassle of going back and forth while installing your new combo light switch, you should gather all the necessary tools first.

Here’s a quick look at what you’re going to need:

You might also want to wear protective gear like insulating gloves and protective eyewear for added safety.

Step 2: Turn off the Outlet Power from the Circuit Breaker

To avoid the risk of electrocution or shorting the circuit, you must always start by cutting off the electric power from the room where the outlet is placed.

To do this, head to the circuit breaker in your house and open the metal door.

Locate the breaker responsible for electricity in the said room (usually labeled) and shut it off.

Once you’re back, make sure that the electricity is off by testing out all the working light switches in the room and make sure that no lights will turn on.

When in doubt, simply shut off the electricity of the entire house to avoid any problems moving forward.

Remove the screws from the old faceplate and use a flathead screwdriver to pry it off the wall and expose the old light switch directly.

Make sure that you do that gently so that you don’t crack or break the faceplate. 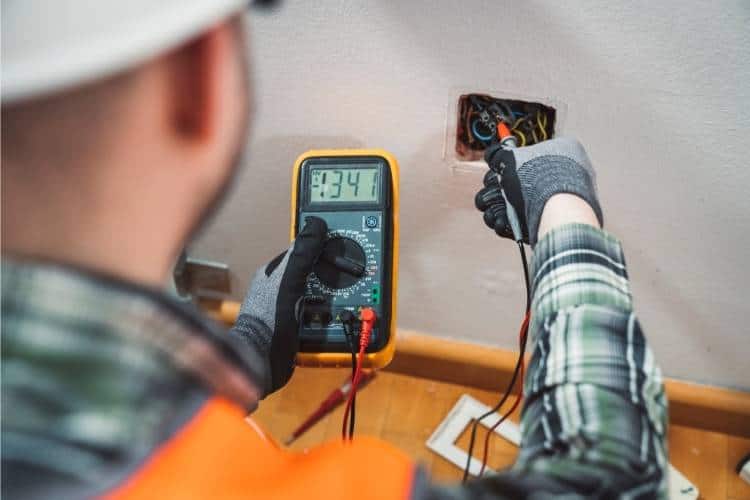 Once the faceplate is off, use a voltage tester to make sure no electricity is coming from the old switch.

Start by taking a good look at the old switch and where all the wires are connected.

After that, go ahead and remove all the wires.

To do that, you’ll need to remove any old electrical tape insulation and/or wire nuts to uncover the terminal screws and use the screwdriver to loosen the connection to the wires.

You can also use needle-nose pliers to help you get thick wires off the switch.

Once all the wires are detached, remove the old light switch and bring in the new one.

In order to rewire the new switch, you’ll need to loosen the terminal screws if they’re tightened all the way.

After that, you’ll need to attach the feed, neutral, and ground wires exactly as they were attached to the old switch.

Wrap the exposed copper part around the screw terminal, then tighten the screws firmly (make sure exposed wires aren’t touching other wires).

Step 6: Give the New Switches a Quick Test 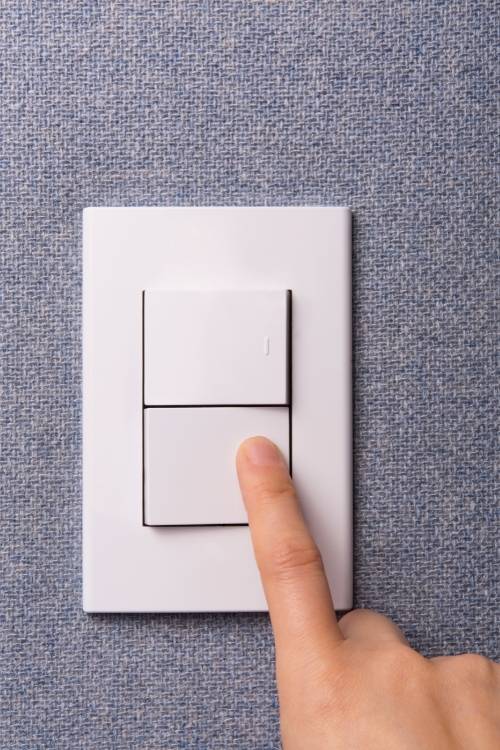 Now that all the right wires are in place, it’s time to give your setup a final test before finishing up.

Head to the breaker and flip the power back on, then turn on the switches carefully while avoiding the exposed parts.

Step 7: Put Everything Back in Place

Once everything is in order, go back to the breaker room and switch the power off

Then return to the box and put the switch back inside with optional duct tape insulation, and attach the faceplate again to the outlet.

Tips to Keep In Mind While Replacing Double Light Switches

Now that you know how to replace a dual light switch, here are some tips and further information that you might want to keep in mind for better results.

Safety Should Always Be Your Priority

Dealing with electricity involves a lot of issues, such as electrocution, electric shorts, shocks, and many more risks.

In some cases, these shorts may result in pops with sparks or electric fires.

For that reason, you might want to wear protective glasses and insulation gloves while working with outlets.

Additionally, you should also have a small fire extinguishing spray like this one, because electricity fires should never be put out with water. 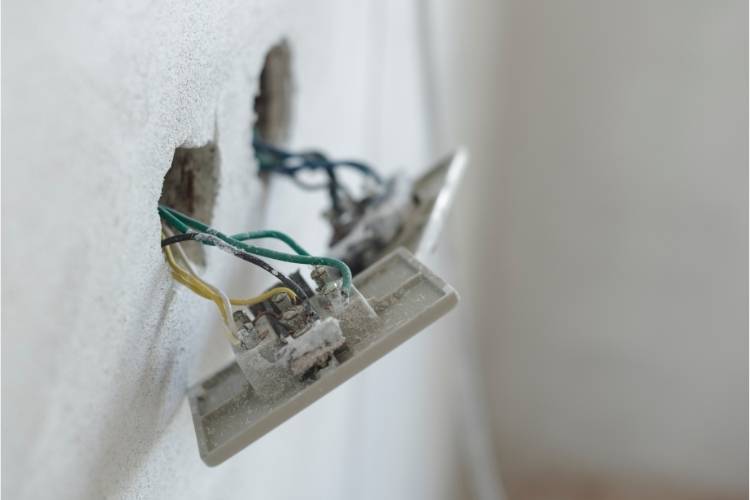 One of the best ways to avoid incorrect rewiring and electric shorts is to make sure that all the wires are connected exactly as they were before replacement.

The easiest way to do this is by taking a few pictures of the old switch before removing it.

The pictures should be clear and show which wires go into which ports.

If you’re replacing an old switch, chances are that the light switch was malfunctioning.

To avoid this problem in the future, make sure that you opt for a good quality option.

If you’re looking for a good recommendation, you should consider Leviton 5634-W Switch.

This one is reliable and uses quality materials to ensure long-lasting service.

Wrap the Terminals with Electrical Tape for Added Safety

One trick that will make the connection a lot safer and prevent shorts and loose wire problems is using electric tape.

Simply use the tape and wrap it around the terminals after you’ve connected them to the wires.

This is also ideal for tightly packed electric outlets.

How Much Does It Cost to Replace a Double Light Switch?

As long as you’re doing the job yourself, the entire project should be remarkably cheap.

Ideally, a good quality switch should cost you anywhere between $10 to $15.

The project would cost you more if you’re buying some equipment for the first time, such as multimeters, voltage testers, screwdrivers, etc.

However, these tools are extremely versatile and will save you money while working on other projects around the house – adding an outlet to a switch anyone?

How Often Should I Replace a Light Switch?

There are no specific guidelines on the amount of time before replacing a light switch, as most light switches can serve for as long as they’re functional.

Since a light switch is expected to last for anywhere between 15 to 20 years (provided that there’s no electric shorts or other sorts of damage), you shouldn’t worry about that until then!

Can You Replace a Single Switch with a Double Light Switch?

You can replace a single switch with a double or twin switch to have better control of your new lights in the room.

However, you’ll need to make sure that the box already has extra wiring ready for a double switch, find this wiring and connect it up.

If not, you’ll need professional help to add and feed wiring through the wall to install the additional switch.

There you have it! A brief guide that shows you how to replace a double light switch and install a new one!

As you can see, replacing double light switches is a relatively easy task as long as you’re careful enough, so make sure that you follow all safety precautions while pulling this off!