A riving knife is one of the most important “modern” safety components on electric saws. You’ll see them on quality table saws, band saws and other large wood-cutting saws.

As a new method for helping to reduce or even eliminate “kick-back” from cut wood, a riving knife performs a bit better than previous standard methods.

In addition to it’s better function, it is also easier to use while actually performing cuts.

Because of this, users are more apt to keep it attached to the saw instead of removing it and storing it in order to get it out of the way.

What Does a Riving Knife Actually Do?

When a saw makes a cut, and more specifically a “rip” through a piece of wood length wise, with the grain, the saw operator must feed the material through the saw.

As the blade slices (or chews) through the wood there is only a little bit of space left between the two pieces of wood that are being created.

Why is this important to know?

This space doesn’t just stay uniform until the wood is cut in its entirety. Wood slides, wobbles and moves out of alignment.

This changes the newly created gap irregularly around the saw blade itself. As it does so, pressure gets placed on the spinning blade and can end up binding to some degree.

When it’s enough (and it doesn’t take much), the only part to give in the process is the board being cut. 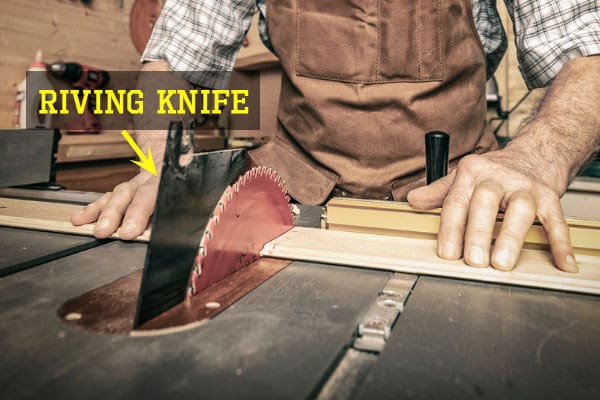 These accidents are hard to predict in the moment since wood varies throughout itself with regard to density, stiffness, moisture, grain and more.

These characteristics influence the fluctuations that occur as the wood is being fed and cut.

The blade grabs at the stock, and instead of cutting it, thrusts it forcefully in the direction of the person using the saw.

It is. A riving knife then acts to create a more consistent separation on the splitting wood just as it passes the blade.

The result is that the material being cut glides more smoothly along the fence and blade, and ultimately the riving knife.

It’s as if you have a helper grabbing the sheet as you push it across the saw.

Some advantages a riving knife has over previous methods of kick-back avoidance (namely splitters) is that it’s more integrated into the saw.

For example, it sits aligned with the blade so that no matter what kind of cut you’re making, it won’t get in the way.

Also, it’s located very close to the blade, allowing less time for wood to shift or close in on itself. This is obviously a safer set up.

Further, a riving knife doesn’t get in the way of other safety components such as a dust or chip guard.

The Real Beauty of Riving Knives…

Most saw operators will confess that at one time or another they have removed their rip guards from there cutting tools.

Most likely it’s because they were in the way.

And more often than not, the safety feature wasn’t reattached because it was just a “pain” to do so.

When you have a saw with a riving knife, there’s never a need to remove it.

It does it’s job, you get peace of mind, and you’re never inconvenienced by it being attached.