A furnace thermocouple is a device on a standing pilot gas furnace that’s responsible for opening and closing the main gas line to your home’s heating system.

A slim, rod-shaped flame sensor sits in the path of your pilot flame where it collects and then transfers heat down via a flexible connector (wire or tube) to signal, through an electrical charge, that the main gas valve should open.

It’s an important part to your gas burner assembly, as without it working properly, your furnace’s gas valve will not open to allow gas to come through and light the burners (in other words, fire them up).

Generally, when you learn what a furnace thermocouple is and what it does, you’re trying to fix your furnace because it’s not coming on.

Usually a furnace thermocouple is to blame when you can’t keep a pilot lit or if it is lit, the burners aren’t firing.

Whatever the case, you either have to make some adjustments, do some cleaning, or do a replacement.

Let’s take a quick look at how you might troubleshoot and fix a furnace thermocouple.

Before attempting any repairs, it’s a good idea to inspect and test your furnace thermocouple.

To test, press a red button that should be located on the control box (you should see something marked “pilot”). This allow gas only to the pilot.

If this doesn’t work, you can hold a match or lighter on to of the thermocouple.

You’ll need to do this for about 60 seconds as you want to heat the sensor.

When finished, the pilot should be lit and stay lit. If not, then you need to either clean or do a gas furnace thermocouple replacement.

Adjustments for your furnace thermocouple 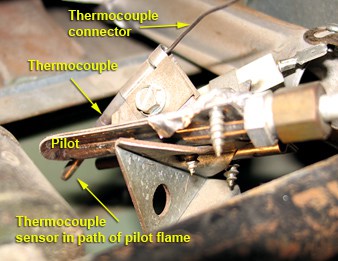 It’s crucial that the end of your thermocouple (tip) is in the path of a good pilot flame.

First, inspect the flame. It should have a yellow tip and cover the tip of the thermocouple.

The idea is to make that sensor portion really hot. If it is short and blue, then it is too weak.

Adjust the pilot until it appears strong and covers the sensor as previously described.

If the flame is good, then you may need to move the position of the thermocouple sensor part itself.

Carefully push or bend it into place, as it may have been bumped out of alignment during attempted repairs.

How to Clean a Furnace Thermocouple

If you’ve tested the thermocouple, and the flame didn’t stay lit, then it’s time to clean it.

Carefully clean the end (sensor part) with a small wire brush, or ideally an emery cloth.

You can even use the end of a knife or smooth sand paper. Do not use liquid or soap of any kind. The goal is to work off any grit, grime and dust.

If you’ve concluded that you need a new furnace thermocouple, then be sure to buy one that’s just like the one you have.

If you have an older furnace (one that’s over 15-20 years), this may be difficult. You might have to call around or hire a professional.

Remove your old one by loosening the nut that connects one end to the control valve, then loosen the nut on the other end where the sensor is held by a bracket.

Slide the sensor out through the bracket hole and place the new one in the same way.

If the new one still doesn’t work, you may actually need to replace the gas control safety valve. At least you would do this knowing you had covered all the bases with your furnace’s thermocouple.