There’s nothing more annoying than when you close a door behind you, and it opens right back up again on its own.

Each time you close it, the door unlatches itself and opens, as if a ghost is pushing on it. The worst is when it happens hours later, in the middle of the night (creepy!).

But what’s going on here, the door is closed shut! No, pushing the door closed really hard doesn’t fix the problem, nor does slamming it.

A broken latch, strike plate or hinge? Not likely.

Keep reading to see how easy this sanity testing problem is to fix.

How Does a Door Stay Latched?

We all know that when we turn a door handle and close a door, we’re actually making a little bolt about the size of our thumb move into a slightly larger hole that’s been bored out in the door jamb. 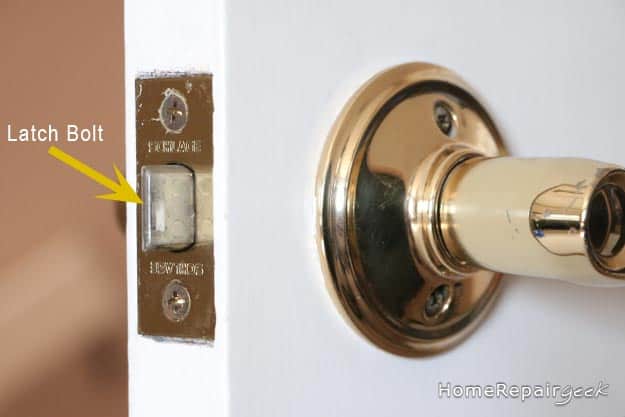 This bolt is called a latch bolt (fitting, since its job is to latch a door closed and unlatch a door to enable opening it!).

The latch bolt slides through a hole in a flat piece of metal called a strike plate that is attached to and covering a hole in the door jamb.

The idea is that for a door to latch properly, the latch bolt must make its way completely through the strike plate opening and rest snugly in the latch bolt hole.

If it only does this just part of the way, your door is susceptible to opening on it’s own, entirely without your consent!

Don’t feel bad though…as it turns out, the latch bolt missing its target is actually a common problem that, in most cases, is a simple issue of door misalignment. 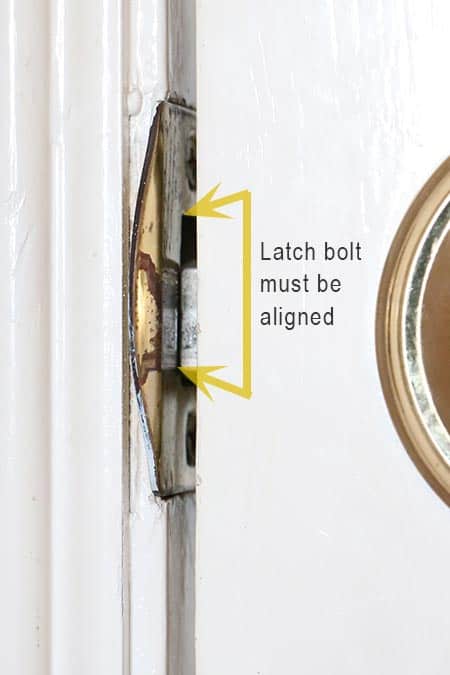 The latch bolt MUST align with the center of the strike plate opening when you close the door. And you thought you only had to get your car tires aligned!

Now, if you’re daring enough you can actually get a flashlight, bend down to where you’re eye-level with the door handle and watch the latch bolt as you close the door.

You can usually see that it’s either slightly above or slightly below the center of the strike plate opening as it attempts to latch. Neat stuff, isn’t it?

Okay, so how do we go about aligning the latch bolt and strike plate opening?

Well, there are actually a few ways, and they all lead to adjusting the door either up or down slightly so it properly aligns.

Sure, you could do this yourself each time you close the door, e.g., lift up on the door as you close it to force the latch bolt up into the latch bolt hole, but let’s do the right fix and do it one time!

1. Using a phillips-head screwdriver tighten all door hinges so that none is loose.

Now, try closing the door and give it a push. If it still opens without turning the door knob (meaning it didn’t latch completely), then go to step 2. Tightening the hinges is good though, so no harm done.

2. Check the top of the door. Is the top edge parallel with the top door jamb (head jamb)?

If it sags one way or the other, then this is usually another clear sign that the door is out of alignment and won’t latch correctly. One quick way to compensate for the misalignment is to get a file and file down the bottom of the strike plate opening where it meets the hole in the door jamb.

This may bring success, but it may not be enough. 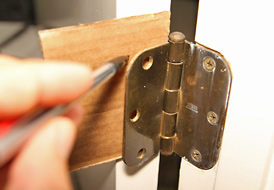 Fortunately, you can alter the position of your latch bolt by tilting the door either up or down.

Read on to learn this special trick you’ll want to use on every door not latching closed in the house…your friend’s house…your neighbor’s house…(you get the point).

Shimming to the Rescue

You can do this by “shimming” either the bottom hinge or top hinge. Shimming just means placing a spacer in between the hinge plate and the jamb where it screws in.

Again, use a flashlight to watch your latch bolt as you close the door. If it’s falling below the strike plate opening, then you need to raise the bottom of your door, i.e. shim the bottom hinge.

Shim the top hinge if your door needs to be lowered.

For the shim, cardboard is perfect. Simply cut a piece of cardboard off an old packing box or shoe box to the size of a hinge plate.

Unscrew the hinge screws and set them aside. Lift the door out of position just a few inches to give you room.

A helper is a bonus here, or you can place an old book under the door to support it while the hinge is off.

Now, place your cardboard piece on top of the screw holes in the jamb. Carefully align the hinge plate over the cardboard.

Insert your screws (they’ll puncture the cardboard easily) and screw them in.

Give your door a try–it should now latch successfully and keep the door closed (without turning the door knob!).

If you still have more to go, try a thicker piece of cardboard or put on a second layer in. Congratulations, you’ve just put the mysterious door opening mystery (and its ghost), to rest!

How Do You Adjust the Door Latch?

There are a few ways to adjust a door latch that does not close properly.

Try tightening the screws on the hinges or replacing them with the correct sized screws if they appear damaged.

First, cover the bottom part of the latch with something that marks (lipstick, caulk, etc.).

Close the door and move the latch back and forth to mark the strike plate.

File the plate inwards until you reach the mark, then try latching the door again.

Secure the strike plate to the door frame with screws and check if the door latches properly now.

Why Won’t the Door Latch Retract When Closing?

There can be several reasons why your door’s latch is not retracting properly. The first step to solving the problem is to find what’s wrong.

Some common issues (and their solutions) are:

The Strike Plate is Misaligned

Adjust the strike plate to align it properly with the latch structure.

The Latch is Jammed

Take the lock apart and clean it thoroughly with vinegar.

The Internal Mechanism is Broken

Sorry, but it’s time to get a new handle!

Sometimes it’s not worth the time or even possible to solve the the main issue; so, to fix a door that won’t latch shut, you may have to buy a whole new handle in addition to make some of the other adjustments covered above.

Seems to easy to be true. But, it worked perfectly for me. Thank you so much!

Looking forward to trying this out tomorrow. Thank you Next I have to replace a window screen. Help!

Ghostly happenings have been taking place for a few months in our house. But I kept thinking somehow this had to be the door latch. Well geez and I was right. So I got my little girlie toolbox out and set to change the door knob. No such luck. So then to the internet to find my new favorite DIY page. It was such clear and easy to understand instructions that I figured it out first try. Thank you so much. I can now have a wee bit of privacy in my own home again!!!

The shimming did the trick! Not only did it fix the latching problem, but it corrected a slight gap at the top of the door making everything now uniform in appearance. From cutting the cardboard to putting it in place was a one-person job that took about 15 minutes from start to finish. Thanks!