Many homeowners, renovators, and builders are faced with the dilemma of selecting the best subfloor screws to use, especially when re-securing a subfloor, replacing, and installing it.

Fixing your squeaky floor often means working with the subfloor and the screws that secure them to your floor.

So what if you’re a beginner (like I once was!) and don’t know much about subfloor screws?

You’re probably wondering about their integrity and longevity.

What’s more, you’re even likely comparing them to the traditional nail!

You should ideally invest in a high-quality subfloor fastener that can provide long-lasting security.

I know choosing the right subfloor screws can be tricky! And properly installing them, even more so!

But not to worry, in this article, I’ll tell you exactly how you can choose the right subfloor screws and even fix your annoying squeaky floors if needed!

So let’s get started and learn more about flooring screws.

How Are Screws for a Subfloor Different?

Here’s the main reason why you should use them while installing a subfloor:

To provide a long-lasting and strong hold between your underlayment and subfloor.

The best kind are designed to minimize gaps between a floor joist and the subfloor material to prevent squeaking floors over time.

How to Choose the Right Subfloor Screws?

You can always ask the assistant at the hardware or big box store, but it helps to be aware of the types and sizes of subfloor screws before you begin work. 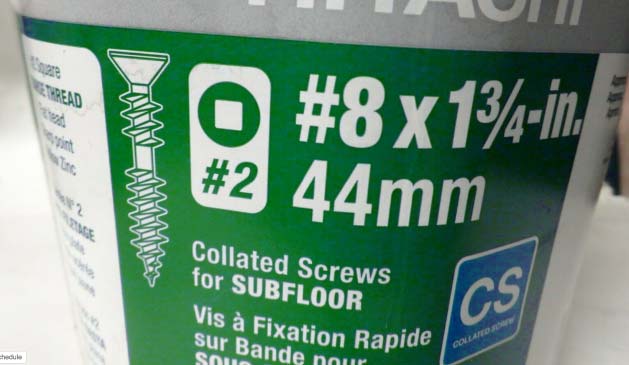 Knowing what type of screws for subfloors are available can help you make the right choice based on your need.

You can choose between two kinds of screws available. Each has its own set of advantages and, yes, flaws!

Stainless steel screws were first introduced as “rustless steel” in 1913.

These screws for subfloors are generally designed with a helical thread that spirals partway as it reaches the tip of the screw.

They’ve been in the industry for more than 100 years now!

But, like our wardrobes, they’ve been reinvented and improved, with their base formula altered several times!

The purpose of all the screws remained the same all through. Only the levels of chromium, copper, nickel, and titanium were altered.

Wondering what are the ideal screws for plywood subfloors?

Steel screws—simply because they can hold the wood intact without causing too much damage to the fiber.

And not just that:

They can also sustain maximized lateral movement without snapping or warping, breaking, or cracking.

The durability of steel screws is referred to as shear strength, making them the go-to screws for interior subfloors, especially for initial installation.

These screws are preferred due to their strength and durability. They can also hold and fasten the subfloors in place without producing any noise.

These subfloor screws are technically black steel screws that are given another Zinc coating to protect them from corrosion and deterioration.

So why are they called galvanized screws?

The term was derived from the manufacturing process used to create it.

How does the extra coating help?

Thanks to their additional layer of protection against moisture, galvanized screws are best used when installing lumber that is chemically treated.

They’re also great for floors outside like decks and porches.

What’s more, this type of screw can resist all weather conditions longer.

And since they are also patterned from steel screws, you won’t have to worry about any unnecessary sounds when walking on subfloors fastened by galvanized screws.

Although galvanized screws are as strong as stainless steel, under that protective layer of Zinc is plain black steel which, unfortunately, is very vulnerable to corrosion. The zinc coating may fade at some point.

With both types, they’re easy to back out should you ever need to remove screws to access floor cavities.

What about the drives and necessary screw bits?

Subfloor screws most often come with either a star (Torx T25 size) head or a square drive or head.

The most common type is actually  square since, as this type of drive offers a very clean connection with its matching bit.

The square drive is also very resistant to cam-outs, which is when the driver slips out of the head during turning (something you don’t want when securing subfloors!). 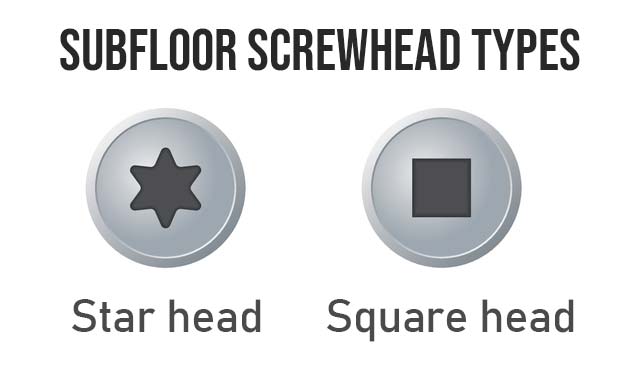 When you know the different subfloor screw sizes available, you’re likely to make a suitable choice.

Here are two essential guidelines to help you decide what size screws for subfloors are best for you:

And here is the proper way to identify what length you need:

Identify the thickness of your subfloor.

If you are using plywood, you want your screw to go at least an inch past the plywood and into the underlying surface under it.

So if you are using a ¾-inch thick plywood floor, start with a 1 ¾-inch-long screw.

The screws must be long enough to go through the primary material of your subfloor.

What would make it even better?

Fastening them to the layer underneath or joist—this will ensure the safety and stability of the floor. 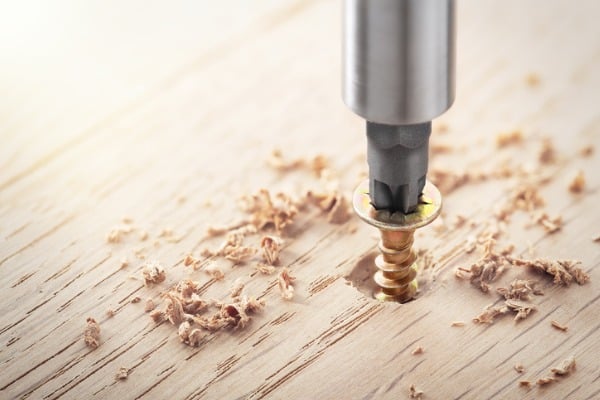 With the correct screw length and diameter, you can confidently use the most effective screws for your subfloors.

Screws sure are tedious to fasten into a subfloor. It takes a lot more time than it would to shoot a nail on plywood using a nail gun.

And so, to effectively and quickly screw my subfloors, I always rent a screwdrive. These tools auto-feed collated screws quickly and easily to make the job much easier. 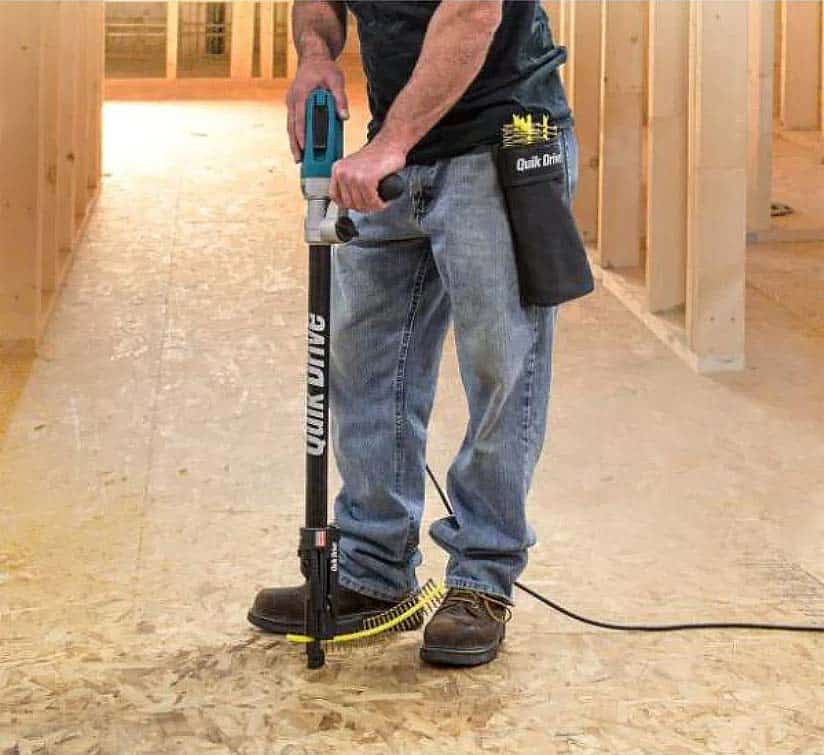 You can buy collated subfloor screws to use in an auto-feed screw driving system at The Home Depot.

If I don’t have this tool, then it’s the good ol’ fashioned electric drill to the rescue.

You can also consider using an auto-feed drill. It won’t be as easy and quick with nails and a nail gun, but it is still most convenient, easy on the hands, and practical.

Installation will be better if you have the right equipment. If you’re using subfloor screws for the first time, check out this tutorial to understand the task better:

Pros and Cons Of Subfloor Screws

It can be a real nuisance if, at every step, you hear your floors squeaking in protest.

The good news is, you can fix this problem like a pro without a hole in your pocket!

Here is a quick DIY on how to fix your creaky floors:

Usually, the noise occurs because your subfloor has come loose and separated from the floor joists. The first course of action here is to shim the subfloor.

You can wedge shims between the subfloor and the joist and then set it in place using a clawhammer.

Never pound on the shims because doing so will lift the floorboards and cause more squeaking.

You can secure the moving boards in your subfloor with a cleat or a piece of lumber.

This is a better option than shimming the boards separately.

How to do this?

Make sure that you cut the lumber pieces so it forms a tight fit against the joist.

So do you pick a long or short screw?

Shorter screws are best for this because you don’t want to end up fixing up the finished floor damaged by long screws.

You don’t want the longer screws to break through the top of your finished floor.

Why are screws better than nails?

Sure, nails are easier and faster to use as fasteners to install subflooring.

However, one significant and annoying drawback of using nails is squeaky floors.

The nails are sturdy, but they wiggle and move around, causing these movements to produce floor noises.

Although this will not manifest right after installation, it will eventually lead to this nuisance we all detest.

On the other hand, screws are a better option because they stay in place long after the installation.

Screws are also better for durability and strength, especially if you are after long-term effectiveness.

What are drywall screws?

Drywall screws are not your choice for subfloor use because, as the name suggests, they are intended for drywall.

This kind of screw is not thick or strong, so it is not recommended for use on plywood.

Additionally, drywall screws tend to move around, and warping happens when under too much pressure.

And we all know that subfloors are constantly subjected to pressure from people standing on them and even from furniture and fixtures set on top of them.

Can construction screws also be used for the subfloor?

Yes, construction fasteners also make an excellent option for subfloors because they are also designed with serrated threads towards their edge, similar to stainless steel screws.

This means that this particular screw cuts the subfloor almost like a saw.

Thanks to this, you no longer need to drill a pilot hole during the subfloor installation. This is an advantage as it reduces the time it takes to install the floors.

What is the best screw spacing for subfloors?

Place the screws 6 to 8 inches apart when installing the subfloor.

This spacing allows normal movement on your floor without subjecting it to unnecessary pressure. This distancing is also recommended to ensure solid security to your subfloor’s foundation.

One of the secrets to having a solid and beautiful floor is ensuring that your subfloor is secure.

One of the most practical ways to achieve that is to correctly choose the subfloor screws that you will use during the installation and while re-securing and replacing your subfloor.

Invest time and effort in choosing the best screws for subfloors because a project like this needs to be well-thought-out and planned with only the best tools and resources.