Used primarily for decorative trim such as baseboards and moldings, a miter box comes with pre-cut slots that help to guide a saw to cut specific and accurate angles. Miter box angles usually consist of 45-degree angles and 90-degree angles for square butt joint cutting. 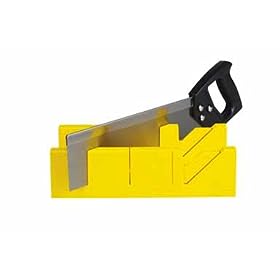 A miter is a joint that is formed between two pieces of material, created by making cuts of equal angles at the ends of each piece. The two pieces can then fit together to form a miter joint, often used for frames. For example, two 45-degree pieces cut in a miter box can join together to make a 90-degree joint, such as on door casing or baseboard molding. (Also to “miter’ something, means to cut such angles and create the joints. A miter box helps you to do this!).

Miter boxes come in basic and more complex forms. Check out miter box types like these to get an idea of the different kinds (and prices!) of miter boxes. Miter boxes you find in the store are commonly made by the Stanley company. Stanley miter boxes come in a variety as well, including multi-angle, contractor grade and your basic plastic miter box for just a few dollars. If you’re handy, you can even build your own miter box.