Air Conditioner Repair » Ceiling Fan Makes Noise: What to Do

By nature, ceiling fan noise pretty much comes with normal operation. But… we’re talking about the air noise that 4 or 5 fan blades slicing around through the air create.

And that’s if the fan is running on high while it’s cooling or helping to keep you warm. There’s nothing you can do about that sound since it’s governed by the laws of physics.

Ceiling fan motor noises and rattling, however are not normal. Thankfully you can usually do something about these annoyances through some minor adjustments.

It can be pretty aggravating if you’re trying to sleep, concentrate or listen to other sounds while your ceiling fan is being noisy.

Round and round, you may here a clang or a creak. You might also hear a hum or a buzz.

The truth is, you may have one or more of these audible issues with your ceiling fan, and it’s a likely occurrence.

This is because of all the various parts and assemblies that make up a simple fan, especially one with lights.

Add to that the possibilities of improper installation, age or damage and your fan is open to any number of ailments.

Let’s take a look at some of the usual abnormal ceiling fan noises and the steps to take to fix or at least reduce them.

How to Fix Ceiling Fan Noises That Make You Crazy

The first step is to examine your noisy ceiling fan and try to understand what the noise is and where it’s coming from.

We’ll assume your fan comes with a lighting assembly, just so we cover all the bases.

The following takes you through a process of elimination to pinpoint where odd sounds are coming from.

If you already know what it is, scan down to the section that pertains to you and try out the steps to fix the problem.

Bulbs can certainly be responsible for unnecessary fan light noise, albeit pretty small. Since regular vibration occurs when the fans are spinning, it’s a good idea to regularly check that the bulbs are all screwed in tightly.

A loose bulb is unsafe, but it can also create a small rattling sound. Also, remove any that have burned out.

Most fan light globes are held in position with 3 or 4 special screws. These screws literally tighten into the base edge of the globe and keep it in place and attached to the light fixture.

Check that all screws are tight against the edges they’re meeting. No screw should be further in or out than another, thus, all should be equally balanced.

Adjust as necessary using your finger to hand tighten (in most cases).

If your efforts don’t work out, you can pick up a light silencer band at a hardware store.

These are essentially large rubber bands, made to go around the screw heads and the neck of any glass globes or shades and reduce rattling. These usually quiet ceiling fan noise a bit.

Check that the any pull chains for the fan levels or light switch are not dangling against the sides of globes.

If needed, remove these chains and use a switch on the wall to control the fan.

You could also add a heavier light pull to the end of the chain (such as these), to keep the chain from moving around while running the fan. 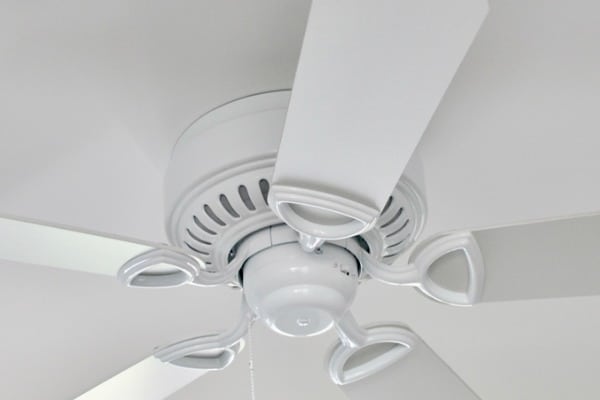 This is the round portion that is directly against the ceiling above the fan. Ensure that it is not touching the ceiling directly, otherwise you may get some ceiling fan noise.

You may need to disassemble and reposition the canopy or mounting bracket to make it level, with a gap between it and the ceiling.

These brackets hold the fan blades to the motor hub. Using a correctly sized screwdriver go around each set of screws and tighten down.

Replace any missing screws. Don’t tighten too much, or you risk cracking fragile blades.

Tighten all screws you see going into the bulkiest part of your ceiling fan. Through normal vibration, these screws can loosen and create unwanted ceiling fan noise.

As part of your inspection, look at the fan blade paddles. Ensure they are not nicked, warped or cracked.

You need these in perfect shape to ensure a proper and quiet ceiling fan operation.

These should also be clean and free of dust buildup. When a fan is running, more dust than you realize is moving around up around your ceiling. It’s good that the paddle will catch a lot of this. 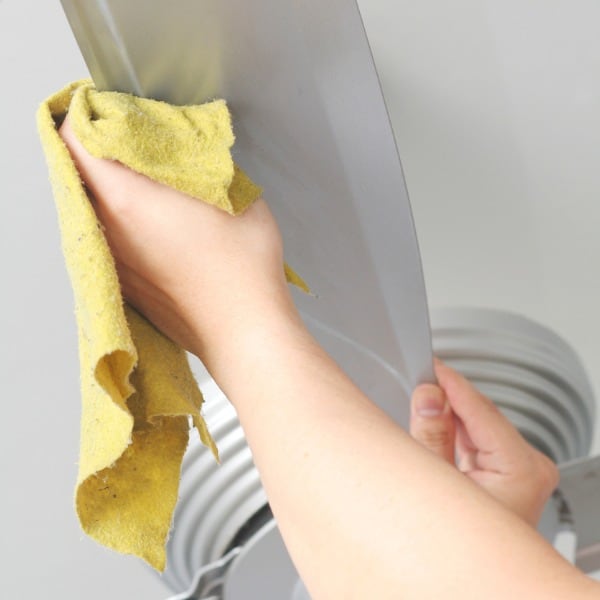 You’d rather have dust, grease and other fine debris cling to these blades instead of getting inside the housing of your fan.

The best part, is aside from being up high, these are super easy to clean.

If you suspect your motor is to blame, because you hear a humming, grinding or buzzing sound, it may be time to replace your noise ceiling fan.

Sometimes you can get away with replacing the fan control. A new one with an anti-hum feature could fix your problem.

But first, decide if just buying and installing a new ceiling fan would be best to eliminate your noise issues instead of trying to repair your existing unit.

Ceiling fan noise due to wobbling

If this occurs, it’s most likely due to an insufficient light box in the ceiling. It may only be rated for a regular light fixture, and not sturdy enough to support a spinning fan.

You’ll have to replace it and perhaps even add extra support.

One of the above checks should lead you to a quieter ceiling fan that’s been making noise. And if you ever issues with your light kit be sure to check out our guide on fixing a ceiling fan light where the fan works but not the lights.

We love these handy inventions but something they just need a little TLC to work (and sound!) better.