After finishing your business and flushing the toilet, you expect to hear a familiar rattling sound.

Instead, you’re met with the dreaded choking sound, indicating a clogged toilet.

In my own experience, I know I had my fair share of clogged toilets.

I wasn’t really sure about the degree of damage I was causing my pipes with the paper towels build up.

You might be wondering what to do when your toilet gets clogged with paper towels?

Luckily, this mess can be unclogged using a straightforward method.

Using a toilet auger can do wonders for your clogged toilet dilemma.

Stick around to learn more about our tried-and-true method of unclogging a toilet bowl clogged with paper towels.

Why are Paper Towels More Likely to Clog Your Toilet?

The only things the toilet can flush are toilet paper and your body’s waste. At first, I thought, what’s the big deal?

Here’s the kicker, while they’re made from the same components, their functions are different.

Paper towels are made to absorb larger amounts of water than toilet paper.

That’s why you often find them in kitchens. They’re mainly used to clean spilled liquids.

The inner linings in paper towels aren’t tightly knit together.

This allows more empty spaces for a liquid to be absorbed in.

The bottom line is that since paper towels are harder to disintegrate, they’re more likely to clog up your toilet. 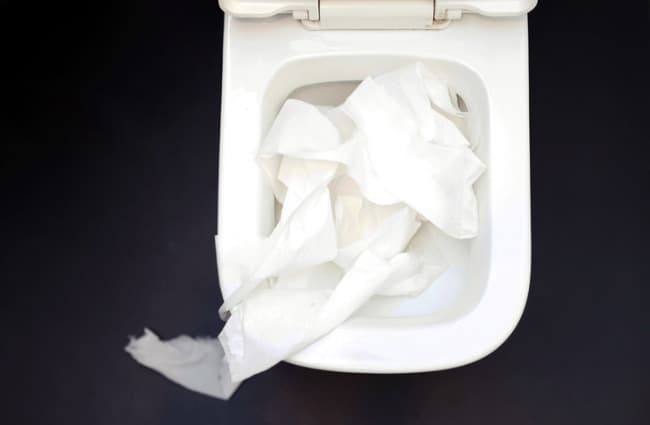 How Are Paper Towels Made Differently?

The first is creping; this process breaks the fitted bonds woven in the paper using blades.

It allows for the creation of more voided areas within the paper towel. It also generates more folds to maximize absorption levels.

Next comes embossing; during this step, manufacturers embed the flattened paper towels to make them bumpier.

This process functions to both engrave a design and make more room for water to be absorbed.

A paper towel’s components make it more challenging to flush because it isn’t as easily dissolvable as toilet paper.

As a result, it’ll be a recipe for a blocked pipe leading to a clogged toilet.

I’ll tell you this, everything made much more sense to me after I knew about this process. I won’t be using paper towels anytime soon.

4 Steps for Fixing a Toilet Clogged with Paper Towels

Now that you’ve figured out why flushing paper towels in your toilet is a big no-no.

It’s time to buckle down and get your hands dirty.

You might have a complete clog or just a slow flushing toilet; either way, the following will get you out of this bind.

Fixing a clogged toilet might not be the best thing on your to-do list, but after this method, you’ll have a clear pipe in no time.

Let’s get into it. 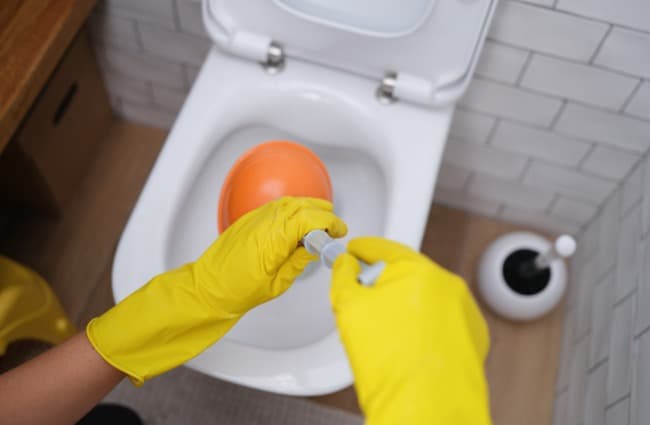 Before facing your clogged toilet, you need to prep your materials and working space. The supplies you’ll need are:

Trust us, you don’t want toilet water splashing on your hands.

This will help suck out small to medium blockages.

The tool will assist in manually clearing your pipes. You can choose a manual (for minor clogs) or a battery-powered one (for more stubborn clogs.)

After getting your materials ready, you need to move any rugs under your toilet out of the way because it’s about to get messy.

You should also prop up your toilet seat to make your movements easier.

Step 2: Start Slow with a Plunger 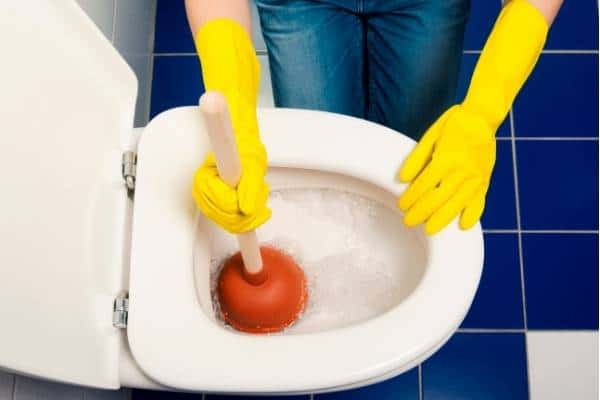 Your first tool of choice when experiencing any clog should be a plunger.

Before placing your plunger inside, make sure your toilet bowl has a good amount of water in there.

If there isn’t enough water, you can add more.

The next thing you want to do is jam your plunger in there.

After its rigid placement, begin pulling and pushing.

It’ll be a heck of a workout, that’s for sure!

What you’re hoping to achieve out of this is to create a suction to draw out your paper towels from inside your pipes.

Who knew there’s physics to unclogging your toilet? I surely didn’t.

Step 3: Move on to a Toilet Auger 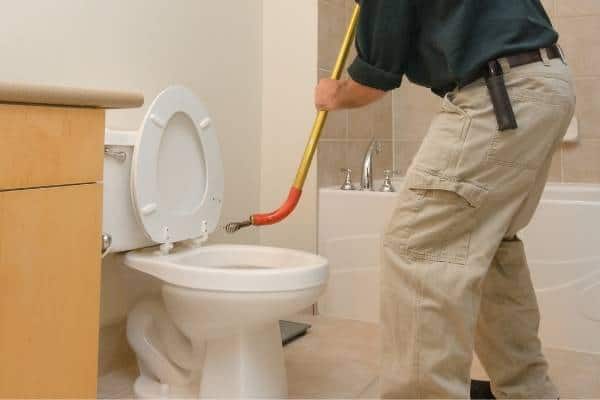 If the previous step isn’t working, you might be dealing with a tighter situation.

A plunger won’t be able to dissolve your clogged paper towels. 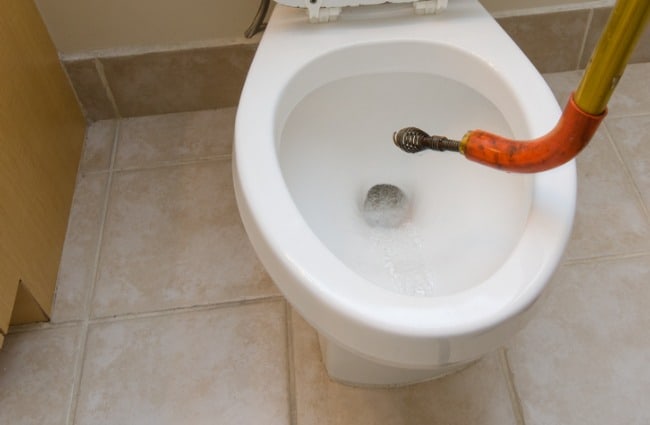 You simply need to place the barbed head inside and control it from the handle.

After slipping the barbed end inside, you’ll likely encounter a block on the other end.

You’ll then want to activate your auger by spinning the handle. 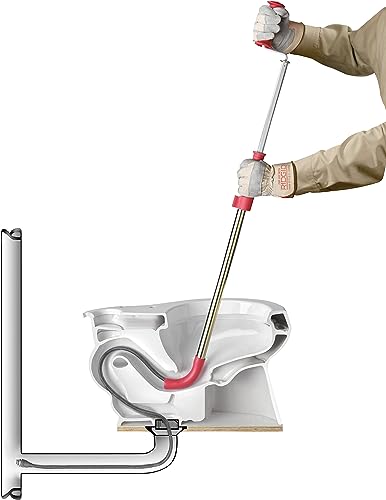 I recommend this model if you don’t already have an auger.

This tool will help dissolve your paper towels and pull them out of the way.

You can go even beyond your toilet’s P-Trap and into your drainage pipes since the tool can extend over six feet.

Say goodbye to any future clogs. In my own experience, an auger was a lifesaver.

Step 4: Take the Toilet Auger Out

Hopefully, by this step, your pipe should be cleared, and you successfully unclogged your toilet from paper towels.

You only need to carefully take your toilet auger out.

Here’s why I said ‘carefully:’

If you haven’t had any luck, I recommend trying it out once more, really get in there. 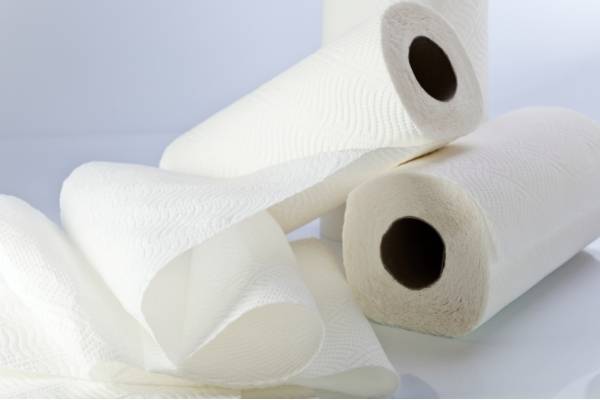 In case you might be asking yourself, “How do I stop this from happening again?”

Well, the best way to avoid a clogged toilet is to correctly dispose of the paper towels.

You can either throw them out in the bin or compost them.

That way, you’ll be able to steer clear of any future paper-towel-clogged toilets.

Want to know the best part about an auger?

You can DIY it by using your closet’s wire hanger.

This is super simple:

Straighten out the closet wire hanger. Afterward, insert one end inside your toilet bowl.

Once you feel some resistance, keep pushing in to unclog your toilet.

Then, you just need to flush it, and that’s it!

Here are some commonly asked questions with regards to unclogging a toilet bowl clogged with paper towels.

What Will Dissolve Paper Towels in Toilet?

Using the toilet auger will help you disintegrate your paper towels quickly.

Will a Toilet Eventually Unclog Itself?

This answer depends on what causes the clogging.

Suppose it’s organic waste or toilet paper. It can take as short as an hour or as long as a whole day to unclog itself.

On the other hand, paper towels will need your action and can’t be left alone to unclog independently.

Where Should I Dispose my Paper Towels?

The eco-friendlier option is to compost them.

Apart from that, you can throw them out in your garbage bin.

Dealing with a toilet clogged with paper towels isn’t an ideal situation, but it’s fixable.

By following our steps and using a toilet auger, you’ll not only unclog your toilet but save some money from resorting to a plumber.

Always make sure to correctly dispose of your culprit to avoid another toilet clogged with paper towels.