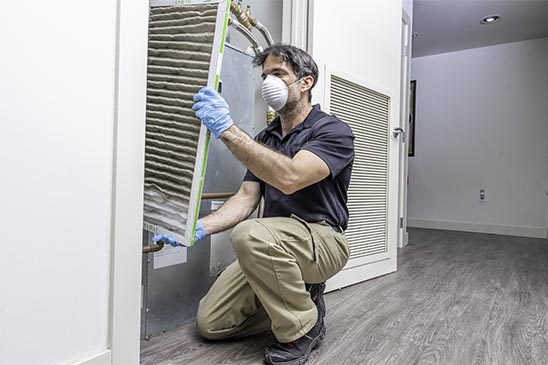 Achieving the best home air quality is highly dependent on the state of your air filter. However, there’s a high likelihood of forgetting about the air filter as it depreciates to a state that it becomes less effective in providing the right air quality in a home.

The inability of homeowners to spot a faulty air filter early on will create different types of problems in one’s home. Fortunately, this article will help you look for signs that your air filter needs changing, such as:

1. The Electricity Bill has Increased Considerably

In normal working conditions, the HVAC system in a home already takes up a large chunk of the electricity bill.

Hence, if that bill rises even more, it’s safe to assume that the HVAC system is working inefficiently. The air filter is often responsible for the inefficient working of the HVAC system, especially when it gets dirty and clogged.

Homeowners can quickly discover the need to change an air filter by checking them or hiring a professional to check for them. This is important as it can help save you costs considerably.

2. Dirt and Dust are Accumulating Around the Home

A dirty air filter typically starts releasing dirt and dust into the home. This will be evident as more dirt and dust than before starts accumulating around the air vents, on furniture, and other areas of the home. When this starts to happen, the air filter needs to be changed.

A good replacement air filter option for dust particle filtration is those with a MERV 8 filter rating. They’re 90 percent efficient in preventing microparticles of 3 to 10 micrometers. Click here to learn more about a MERV 8 air filter.

There are very basic tests to ensure that the amount of dust entering the home has increased. One easy way is to wipe the air vent clean and wait to see the next time it’ll look dirty. If that time is shorter than it used to be then, your air filter needs to be changed.

Another test for determining increased dust is the popularized White Sheet Test. This involves placing a white piece of cloth inches away from a vent for at least an hour. Check to see if the cloth has changed color to black or grey. If it changed, your filter needs a change.

A sign that your air filter needs to be changed is that the air conditioning unit gets overheated as it works. This is due to the integral role that the air filter plays in the HVAC system. With the air filter compromised with clogs and dirt, the system has to work harder to circulate air in the system, causing breakdowns and overheating.

HVAC units that constantly overheat results in frequent repairs, and, when it cannot be salvaged anymore, will also result in permanent damage. A good sign of an overheated AC unit is that heated air comes out from the back of the unit.

4. Heating and Cooling in the Home is Less Effective

The purpose of getting an HVAC system is defeated when the system is not effectively conditioning the air in the home.

An ineffective cooling process is evidenced in lesser cool air being blown into the home within its usual duration. This can be attributed to a dirty air filter in the air conditioning system.

Poor heating results can also be a sign that the air filter needs a change. In this case, the air filter begins to run for longer than usual. This is often attributed to an altered heating cycle due to a blocked and damaged filter.

A dirty air filter will not allow cool air to pass through into the system. This results in a drop in airflow, leaving the home poorly conditioned.

An effective air filter prevents the entry of pollutants, including dust, pollen, mold, bacteria, viruses, pet dander, and smoke. As these pollutants pile up on the air filter, pollutants will inevitably get blown into the air in your home, especially when your air filter needs to be changed.

Allergic individuals are more likely to be sensitive to a late air filter change, while other people may suffer from cough, irritation, and catarrh.

It’s advised that these people make a deliberate effort to check the state of their air filters more frequently.

However, in a situation where such people forget to change their air filter, then they’ll find out that they have more allergy attacks. In such cases, a quick replacement is very important.

6. The Presence of Foul Odors and Strange Noises from the Unit

A well-conditioned home, with the aid of fresheners, has a refreshing air scent around it. If that air scent is not as it used to be, then it might be time to change your air filter.

Foul odors could be due to a buildup of microorganisms, such as bacteria around the duct. An ineffectiveness in letting out odors from several home activities can also be a reason. This allows unpleasant smells to linger longer around the home and to circulate

Also, conditioning systems have a normal sound that comes from them, but when it becomes unfamiliar, it might be a sign that the air filter needs a change. Such sounds are in the form of a whistle or squeaking sound. Both signs show that the airflow has become highly restricted, allowing the blower to make such sounds since it can’t move air. 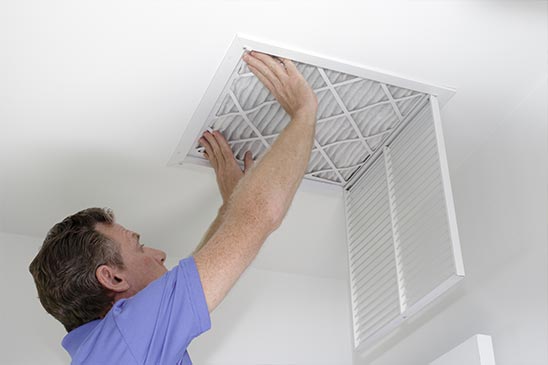 The air filter is one of the most underrated parts of an HVAC system, which has far-reaching effects on the quality of air in your home. An inexpensive solution to ensuring an optimally functioning conditioning system is to ensure a change of the air filter whenever it’s needed.

However, missing the signs of when to replace an air filter can ultimately sabotage taking advantage of the filter change solution. An important sign to look out for is a sudden increase in the electricity bill in your home.

Increased dirt accumulation, an overheating of the conditioning unit, less effective cooling and heating of the home, an increase in allergies and respiratory issues, and foul odors are some signs to look out for.